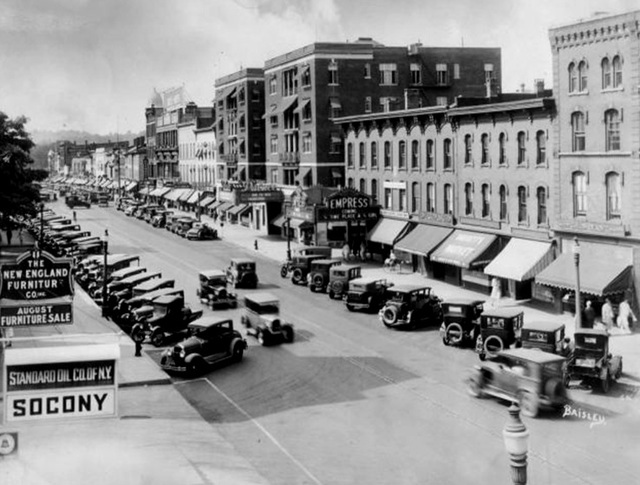 The Empress Theatre at one time was located next to the Palace Theatre on Main Street, with an alleyway between them. Between both theatres is the Democratic Headquarters. The facade of the theatre is now a storefront and as you go down the “Palace Walk” on your left you can see the many offices that have taken over.

It became the Empress Ballroom, a premier all ages, no alcohol venue in the area playing to mostly hardcore, metal, indie, emo, etc., shows.

My friend Brian Blair co-owned and ran it as well as Bill Kutchinsky aka Billy Willy. The venue was at the end on the right and when you are in the staging area, the ceilings are majestically tall, at around 50-75 feet. This whole area is the area under what used to be the stage and you can see the demarcation line halfway up. The stage is about 25 feet by 15 feet with light rigging above, etc. Above you is the balcony and soundbooth with a loft of offices in the back. Underground is the basement and the many sound studios complete with glass soundbooths and kitchen and offices.

Ghosts have been sighted here during shows in the air as well as downstairs. Besides ghosts, there are also shadows that appear and laughter and when you take pictures no matter where in the building, little bubbles appear around the subject matter.

“The History and the Hauntings” (taken from an old issue of the Fairfield Weekly):“The building that now houses the Empress Ballroom was built around 1850. It originally opened as a vaudeville venue called the Princess Theatre and its surviving flyers and advertisements betray a colorful history. When motion pictures arrived, the Princess Theatre was transformed and its name changed to the Empress Theatre in time to host a preview of D.W. Griffith’s groundbreaking film "America” in 1924. The Palace Theatre and the Empress Theatre became side-by-side movie theatres owned by Warner Bros. and were a focal point of activity in downtown Danbury.

The Empress Theatre closed around 1969 and the area the seats once occupied was leveled out and converted into office space (the modern Empress Ballroom includes only the stage portion of the original building).

In the late-1970’s and early-1980’s, the Ballroom space became a tire warehouse and soon after fell into disuse. When Kutchinsky moved in to start construction with partners Jym Parrella and Chris Cacciato, they first had to tear down old dressing rooms and clean out the garbage strewn everywhere following years of neglect".

In 2012 it became the Heirloom Arts Theatre.

From today’s “Do you remember?” in the News-Times.
Displays and demonstrations of modern equipment for the kitchen, dining room and pantry are included in the program of The Danbury News-Times cooking school, which opened this week in the Empress Theater.

I’m very happy today. I was doing research at the Danbury Museum for an unrelated project the last few days and found many pictures of the Palace, Capitol and Empress Theatres, and not just the traditional “Images of America” book pictures. I’ve found countless viewspoints including aerial!!!

Unfortunately, I cannot post pics still, so I’ll send them over to Roger Katz. For folks interested in these great black and white and some color photos, I’d be happy to email them to you in a zipped file. They are great.

I struck gold! I was researching today for a doc I’m producing and Diane at the Museum showed me an old postcard of the 1934 blizzard with the Empress and Palace marquees visible.

I’ll post them later today as well as photocopies of pics (the person didn’t want to donate) of the Capitol’s exterior and INTERIOR! Not ornate at all.

Postcard from 1934 showing Palace and Empress marquees.
Both movies, “Six of a Kind” and “Long Lost Father” are from 1934.

I have great memories of both Theaters. My Grandfather ran the projector for all the movies at the Empress, and my Uncle’s Brother by marriage worked for the Palace. We lived above the Empress as a child. And got to see many of the old Disney Movies,ect Oh the great times we had as a child. I remember the beautiful Fountain in the lobby, that we would throw a penny into for a wish. And the beautiful chandelier’s I always wondered what happen to the marble fountain, and the huge stain glass Chandelier. I remember walking up the metal stairs outside the building to get to the projector room with my grandpa. If anyone can give me any information on the fountain I would love to know where she ended up, and the huge chandelier. thanks for the memory..