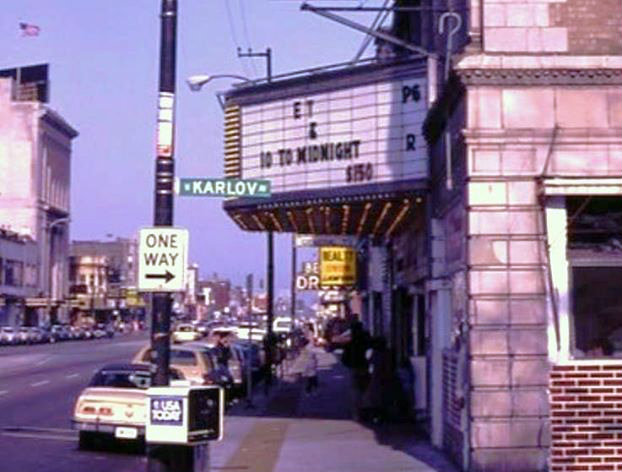 Located on W. North Avenue near Pulaski Road, the New Tiffin Theatre opened on October 30, 1922 with Milton Sills in “Skin Deep”. It replaced an earlier and smaller theatre of the same name 1912-1922, and operated until 1988. The Tiffin Theatre’s orignal 2 manual Wurlitzer theatre organ was opened by New York based organist J.E. Keith. Leo Terry of St. Louis became the house organist. That Wurlitzer organ was later replaced by a 3/15 Wurlitzer organ.

when they were manufacturing on Kostner Schwinn had their own unique way of forming the head on bicycle frames from one sheet metal piece, avoiding certain welding operations. it had its pros and cons, but looking back on it, mostly cons. its discontinuation maybe the only good thing to come out of closing the kostner plant

The Schwinn factory was in the the 1700 block on Kildare across from Wabansia Park. It wasn’t on Kostner. The Tiffin is where I went to the movies when I was kid. I’ve many happy memories of it and several in the back row.

on Kildare (by Wabansia) there’s Greenebaum Park and I don’t know of any chicago park called Wabasia per se. Up to the early ‘80s i’d see the Schwinn bicycle factory bldg—there was a company emblem over the door there—on the west side of Kostner driving by (no reason to regularly drive on residential street Kildare)

No one mentioned Sonny and Cher being at the Tiffin! I was born in that Neighborhood in the 60’s and moved away in 1980. I’ve been to every place, store and on every street mentioned in these comments. Went to school at St Philomena and Nobel. Returned many times since then but I remember the Tiffin as a kid and young adult! Saw many, many movies there! Cheese popcorn was the best ever! Sorry to say I was in a fight at the Tiffin once and still have a scar on my lip from that. Wasn’t really a fight but I got punched in the mouth for making too much noise with my friends and talked back to the guy that told us to shut up! I saw stars! LOL! Last movie I saw there was Stayin Alive with John Travolta. Had to be 1983 or 1984. The neighborhood was really changing FAST at that point for the worse. Getting scary. Guys driving around with pitch forks sticking out their car windows. Gang activity big time! I knew every store up and down North Ave, Kullwins wasn’t mentioned at North and Trip! I worked there for a summer stocking the cooler for old man Kulwinn when I was 12. He was never without a HUGE cigar. His daughters took it over after he passed. They were twins. Don’t remember their names but we used to play Evel Kenevel pinball there for hours and they would kick us out at dark. Lots of people singing at the bar there. Elvis impersonators all over. Even when Elvis was still alive! Guy named Franky always had his guitar and played there. Even famous “EI” Rick Saucedo used to be walking up and down North ave all the time and be in Kullwins. I have heard Franky passed on may he RIP. He could play any instrument, self taught. Guy people called Lurch used to play the song “Don’t it make your brown eyes blue” by Crystal Gale 10 times in row on the Juke Box! He used to have his head down on the bar! We loved pinball so we put up with Crystal. I think of Lurch every time I hear that song and am waiting for it to play 9 MORE TIMES! LOL! Lurch was about 7 feet tall. Used to feel real sorry for that guy. Some babe ruined his life! Beer City. Norm and his wife. Beer City well, it was a place to make some fast cash betting on pool with the Yugo’s as we used to say. One of my best friends used to be a shark and would pretend he did not know how to play! You guys get that if you’re from Chicago! My friend.. May he RIP.. I never beat him a game once, if he was given a chance to shoot once that was it he would clear the table. I am a good pool player! I never liked to bet though because I seemed to be low on ca$h a lot back then! hmmm LOL! Raymond’s cheeseburger place. Pioneer Rest. with the juke boxes in the booths. Vito’s Pizza, yes our friend worked there too and we got free pizzas all the time! It was the best Pizza it that area Hands Down! Guys was a rival and we could not and should not order from there if you get my meaning.. Vito’s was better anyway! I cruised everywhere around there you could humanly cruise then off to the Lake to Montrose pier with car loads of friends! Those were the days my friends! I used to hang out at all different points in that neighborhood and could go on and on forever. Fact is I miss it very much. But I know along with the Tiffin, it’s gone for good and I’m glad I am 2000 miles away from it now. I must also ad here that it was NEVER Greenbaum Park or Wabansia Park during my run. It was ONLY Schwinn Park. The guys that used to hang out there “Knew all of them” would correct anyone that said otherwise! LOL! I played many baseball games in Schwinn Park, grew up on those swings and played in the sprinklers. We were so lucky to have those sprinklers. Not many parks had them. Fact is many brand new bikes in the neighborhood came directly off of the train tracks somehow. There were many bikes in basements in that neighborhood that never saw daylight. LOL! Wow it is all coming back to me now.. Miss the Tiffin now and always. It’s only in my memory now……… Dj

Broan, thank you. Great photo of Tiffin from 1922. I wasn’t born until twenty some years later but I always loved going to the Tiffin. Thanks again!

The October 29th, 1922 grand opening ad had been uploaded in the photo section. It opened on the next day.