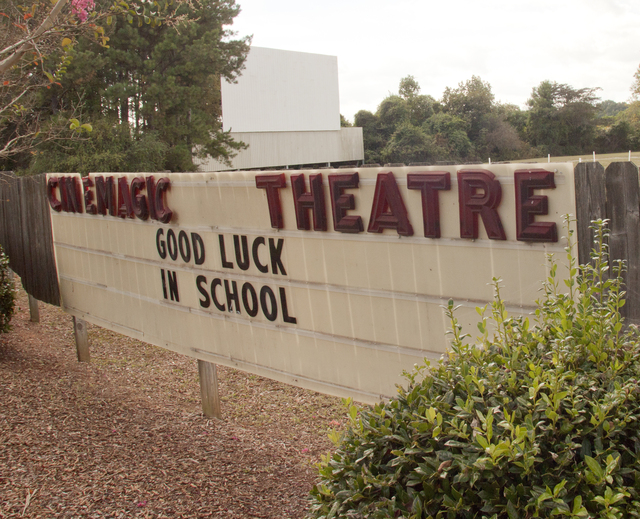 The Cinemagic Drive-In opened May 23, 1997 as a single screen drive-in. The movie shown on opening night was “The Lost World: Jurassic Park”. This drive-in became a twin screen and has a capacity for 210 cars. The second screen has now been removed.

Its nice to hear drive-ins are still opening

Mr. and Mrs. Ralph Freehauf built and own the theatre. They recently opened an indoor theatre at the same location.

Picture of the indoor theatre looks more like an auto parts store than a theatre.

My wife was treated very rudely by your management while being checked for outside food and drink during the previews. She was called ignorant and made fun of by one of the managers and when asked to speak to someone higher in charge, his response was God. Iâ€™ve read numerous reviews online that sound exactly like our situationâ€¦more bad reviews than good. Mr Freehauf, you should be ashamed of your management and as for my wife and I, we will be driving to Huntsville from now on instead of supporting local business. I would not recommend this theatre. Drive to Huntsville. 2 thumbs down!

Wow, what a story,but chuck is right, i would find the owner.Probably a mom and pop operation.

1702 jefferson street S (IT WILL THEN MAP CORRECTLY)

When this drive-in opened on May 23, 1997, it was the first movie theatre to operate in Athens since the early 1980s. The movie shown opening night was “THE LOST WORLD: JURASSIC PARK” The Decatur Daily ran two articles on the theatres’s opening day, one which was appropiately titled “An outdoor dinosaur lives again!”. The original screen was 54 feet by 24 feet. Instead of having the old-style speakers on poles, it uses low-power FM transmitter, so you hear the movie in stero on your car’s FM radio. A second screen was added in 2000 and removed in 2005 in order to build the five-screen Cinemagic Theatre. The drive-in has operated every summer except the summer of 2001. The booth is now in the Cinemagic Theater.

CT can always use more photos and info.

For sale along with the indoor theatre: https://www.al.com/business/2021/10/alabama-drive-in-movie-theater-up-for-sale.html?fbclid=IwAR1qjqKqHvyHRohZXQrtmkFiZOiUoTAwzLyi75XQOAMmstnC8ZR48upDbUM