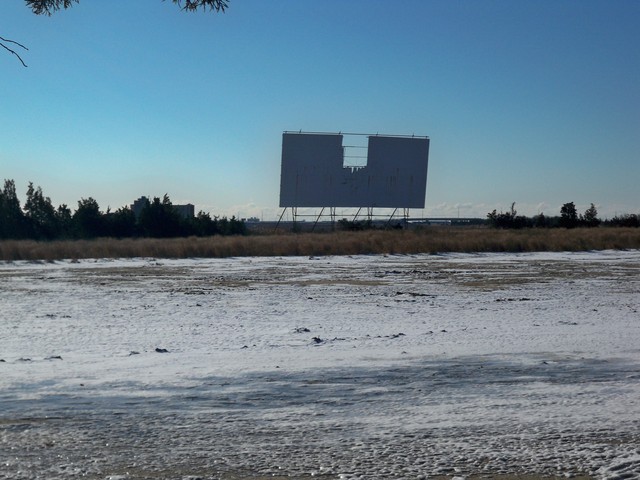 The Circus Drive-In opened in 1953 showing the movie “The Robe” with Richard Burton and Jean Simmons. The car capacity is listed at 1,000. This drive-in closed in 1979.

The screen was still there the last time I rode by. It had a for sale sign. It could be made back into a drive-in a lot easier than a new build. I used to do some projection there. They had Brenkert BX-100’s, & Strong Excellite lamphouses. The main projectionist was Tony Pinto from Hammanton. Mrs. Caruso was the manager. The Brenkerts went to the Beach Twin on Long Beach Island. The lanphouses were rusting on the booth floor when I visited the ruins in 1984.

Nothing there now but a screen, & a bunch of trees! THE FRANKS built this drive-in, I believe. It was almost a carbon copy of the Atlantic & Absecon.

I used to have a pic of the mammonth Circus Clown neon marquee. It said Elliot Gould Getting Straight.

Looks like the screen is still up, but yeah, looks like a big tree lot now. Way South of town on 30.

Approx. address for this drive-in was 3300 South White Horse Pike.

Hey Everyone! My most recent blog is on the Circus DI, and I can confirm that the Franks built the drive-in (I communicated with Bruce Frank, current CEO and President of Frank Theaters).

It is to bad somebody does not reopen it back up.

Drive-in 54, Ive been saying this same thing for years about ANY drive in for New Jersey. Ive always said if I won the lottery I would tear down the vacant Amboys Multiplex in Sayreville NJ (a former drive-in) and put up a nice 4 screen drive-in. But I have a buddy of mine who constantly tells me, taxes too high, cost of labor too high, compact cars not good to sit in for 2 hours, on and on. Ive said if you open it from say the time you turn the clocks ahead till the time you turn them back, youd make a fortune. My buddy depresses the hell out of me, but I for one think they could make money in Jersey.

Looks like they had a huge screen. I remember they screened a lot of Disney films.

It would take a bit of work, but the property looks big enough to twin it. Since there would need to be tree removal and grading work done anyway to open it up again as a single screen, why not go a little further and twin it? Looks like all the original speaker posts and wiring are gone. A modern FM radio transmitter would give you sound. Naturally, you’d have to buy a modern video projector too. Looks like your other expenses would be building a new snack bar/projection/restroom building and a boxoffice building.