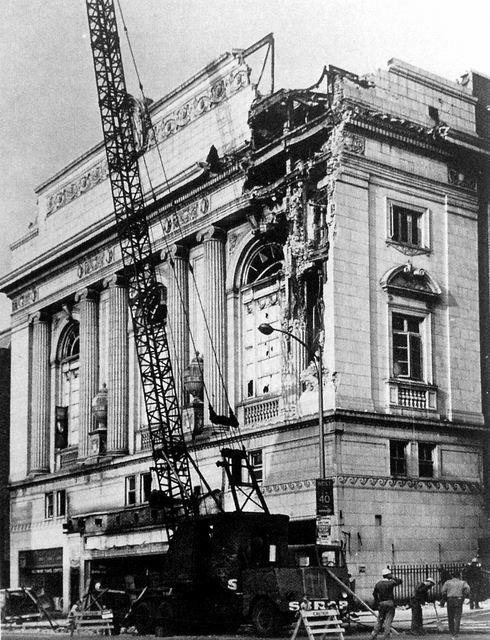 Taken in July of 1965 the once beautiful Romanesque Facade is violently being knocked down by the wrecking ball to become a parking lot a year later. Mechanic decided that the Stanton should not be included in his theater list as fearing of a competition between the Stanton and his new theater which beared his name in One Charles Center. It’s sad how this once great theater after 37 fine years of business and elegance fell to the wrecking crew due to a lousy competition. According to Theatre Historian Bob Headley some critics felt the Stanley did not deserve saving as it was no longer eye catching, even while the walls were being knocked down an editor praised Mechanic for building the Mechanic Theatre and doing away with the Stanley. After the demolition was completed, local homeowners collected bricks from the pile and used them to build the bases of their patios. When demolition workers completed the demolition of the Stanley in 1966 they destroyed the most opulent and most greatest theater in Baltimore.