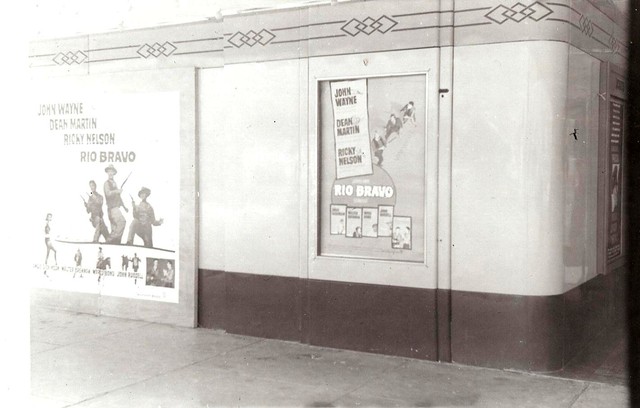 Movie Posters in this period were pretty simple. Just show the actors and their names.

Rio Bravo is a 1959 American Western film, directed by Howard Hawks. The script was written by Jules Furthman and Leigh Brackett, based on a short story by B.H. McCampbell.

In the town of Rio Bravo, Dude (“Borrachón”; played by Dean Martin), the town drunk, enters a saloon wanting a drink. Joe Burdette (Claude Akins), seeing Dude eying his glass, throws a silver dollar into a spittoon to mock him. Just as Dude goes for the spittoon, Presidio County, Texas, Sheriff John T. Chance (John Wayne) kicks the spittoon away, looking at Dude with pity and disgust. As Chance turns to face Joe Burdette, Dude grabs a small piece of firewood and clubs Chance on the head, knocking him unconscious. Dude then starts toward Burdette, but two of his hired cow punchers grab Dude. Burdette starts to beat Dude with the two men holding him. A bystander grabs Burdette’s arm so he can’t swing on Dude again. Burdette draws his gun and shoots the bystander in the stomach. The close-up of Joe’s revolver discharging is the first close-up in the film. Burdette then leaves the saloon and heads for another one thinking that he can do no wrong.

In the second saloon, after Burdette has another drink, Sheriff Chance enters with his Winchester rifle aimed at Burdette, to arrest him for the murder of the bystander. One of Burdette’s men then draws his Colt revolver on Chance and creates a stalemate. Dude enters behind two of Burdette’s men and then takes the revolver of the man standing in front of him and shoots the gun out of the hand of the Burdette man. Chance then whips Burdette across the face with the rifle, knocking him unconscious. Chance and Dude drag Burdette out of the saloon, headed for the jail.

Joe Burdette is the brother of a powerful rancher, Nathan Burdette (John Russell). The rancher’s men then quarantine the town in preparation to breaking Burdette out of jail. The only help Chance has are his deputies Dude and Stumpy (Walter Brennan), an old cripple. Pat Wheeler (Ward Bond), a wagoneer, enters town with a wagon load of supplies from Fort Worth. Tensions are further strained by the presence of a young gunslinger hired by Wheeler to guard his wagons, Colorado Ryan (Ricky Nelson), and the arrival of a mysterious woman, Feathers (Angie Dickinson), who becomes romantically involved with Chance