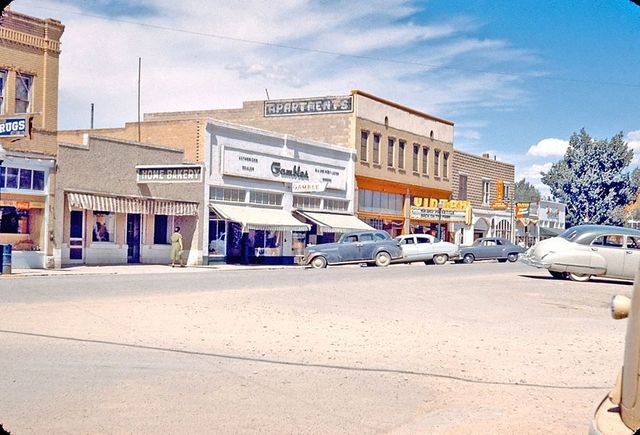 Long time Fruita resident Lee Warner (1899-1990) probably took this photograph of the north side of the second block of East Aspen Avenue in 1951. The film playing at the Uintah Theater, Ma & Pa Kettle Back on the Farm, was released that year. Because we don’t know if the Uintah (telephone number 44), run by Robert C. and Melba Walker, also played second-run films, we can’t say that the photo wasn’t taken later, but if so, it wasn’t much later.

The Uintah was the third and last theater in the building, which had been built for the Majestic Theater, run by Samuel and Lottie Sturtevant, in 1910. Although the old Majestic Theater building hasn’t held a movie theater for more than fifty years, there are still apartments upstairs today. The original cornice fell down a few years before this photo was taken and damaged the theater marquee when the theater was called the Rialto and run by Fred and Carrie Fraser. The cornice was exactingly recreated in the 1990s for Gene Thomas, editor of the Fruita Times, when he owned the building. That’s the cornice visible on the building today."