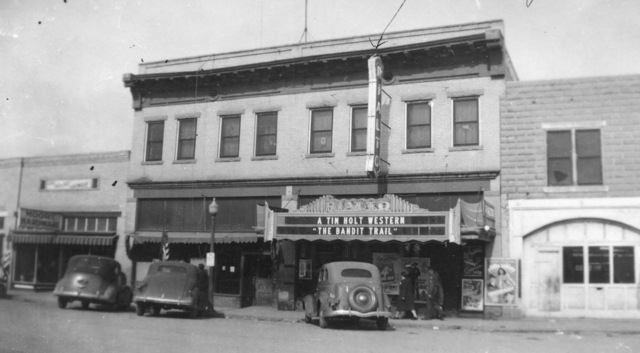 One source claims the Majestic (later, Rialto) opened in 1910

The address should be 219 E. Aspen Avenue. The entrance to the former theatre is now Fossil Tatoo. Apartments are on the second floor. A closeup photo of the current building shows “Majestic 1910”.

Two sources suggest that the theater was called the Uintah during at least part of the 1950s.

The Facebook page of Historical Photos of Fruita & Western Colorado posted this photo of East Aspen Avenue circa 1951, based on it showing Ma & Pa Kettle Back on the Farm. Its poster writes, in part, “The Unitah was the third and last theater in the building, which had been built for the Majestic Theater. … The original cornice fell down a few years before this photo was taken and damaged the theater marquee when the theater was called the Rialto and run by Fred and Carrie Fraser. The cornice was exactingly recreated in the 1990s for Gene Thomas, editor of the Fruita Times, when he owned the building. That’s the cornice visible on the building today.”

There was also a note in the Managers' Round Table Section of the Motion Picture Herald for Aug. 21, 1954 concerning a letter received from Bob and Melba Walker, the Uintah’s owners and managers. Television had recently arrived in town, giving them sleepless nights until Bob did something about it – he bought a TV set for his own lobby and let anybody in town watch it for free. “But, Bob says, at least he sold them popcorn. And the superior value of good movies was impressed on the lookers and buyers. Now, half the time, they don’t bother with TV.”