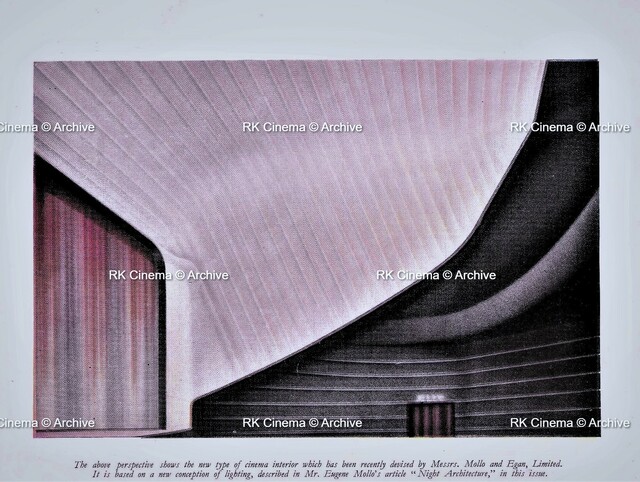 1937 was the year Eugene Mollo decided his concept in design of cinema interiors was to have a more modern approach. The Gaumont Carshalton and Odeon North Watford were two of the first cinemas to be included. Above is a rare Mollo perspective watercolour design published in ‘The Cinema’ January 1937 which was used for the Gaumont auditorium design in association with Holophane automated pre-selective colour control panel. Both cinemas had followed a controversial article written by Mollo entitled ‘Conception of Cinema Interiors'which had stated that lighting up the cinema interior by hanging a sort of roundabout of twisted metal and glass is not aesthetically desirable. the Gaumont Carshalton opened its doors on Whit-Monday, May 17th 1937 focusing attention towards the screen with all lighting concealed. Of course such a statement made publicly must have upset some lighting manufactures like Pride Ltd of Clapham who specialised in making what Mollo disliked. However, the tide was turning with others following Mollo’s lead into the boom year of 1938.