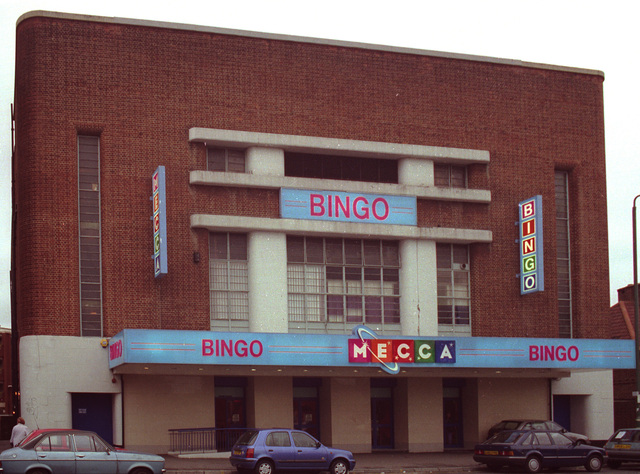 Situated in Morden (Surrey/London border) and just to the north of Carshalton. The cinema was built for Carshalton Regional Theatres Ltd. an independent company, but it was taken over at opening by Gaumont British Theatres Ltd. The Gaumont Carshalton opened on 13th May 1937 with Fred MacMurray in “Champagne Waltz” and “The King’s People”. Organist Terrence Casey opened the Compton 3Manual/10Rank organ.

The Gaumont was later re-named Gaumont Rose Hill after the actual area that it stood in. The Rank Organisation closed the Gaumont on 22nd July 1961 with Dawn Addams in “Follow That Man” and Virgilio Teixeira in “The Boy Who Stole a Million”. It was converted into a Top Rank Bingo Club, which today is operated by Mecca Bingo.

The Gaumont Rose Hill is a Grade II Listed building.

The Gaumont opened on 17th May 1937, it closed as a cinema on 22nd July 1961, the final films played were “Follow That Man” and “The Boy Who Stole A Million”. It went over to Bingo club use straight away, which continues today. The architect was Harry Weston (a Gaumont circuit architect) and the seating capacity was 1,500.

and an older photo from 1988ish showing the facade better :–