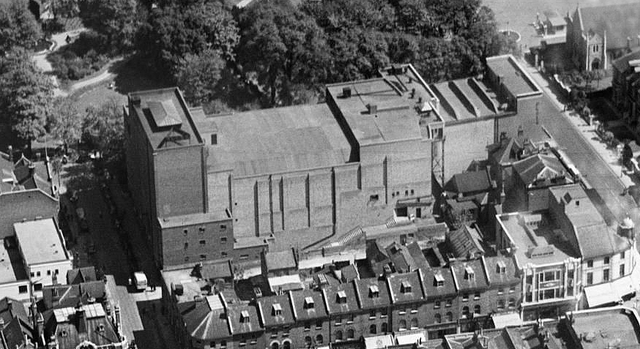 Located on the corner of Carshalton Road West and Manor Park Road, Sutton, Surrey. The Plaza Cinema was opened on 8th September 1934 with Douglas Fairbanks Jnr. and Elisabeth Bergner in "Catherine The Great" and Stan Laurel & Oliver Hardy in "Oliver the Eighth". It was built for Lou Morris, but was taken over by the Granada Theatres Ltd. chain immediately upon its opening.

Designed by noted architect Robert Cromie, the exterior was in brick, with windows over the entrance edged in white Portland stone. The interior decoration was carried out by the interior designers Mollo & Egan. Inside the auditorium, seating was provided for 1,641 in the stalls and 749 in the balcony. Lighting was concealed in several coves, which ran across the ceiling and down the side-walls. There were elaborate grilles on each side of the proscenium, behind which were the organ chambers. The Compton 3Manual/10Ranks organ with illuminated console, was opened by organist Leo Webber. The Plaza Cinema had a fully equipped stage with dressing rooms, which was well used over the years. There was a huge cafe/ballroom on the first floor, over the entrance foyer. At the rear of the cinema was a large free car park.

The Plaza Cinema was closed for a month in September/October 1940 when it suffered some bomb damage. In April 1942, it was re-named Granada.

The Granada’s stage was used over the years when pantomimes were produced around Christmas time in 1947/48 until 1963/64. In 1957 American singer Johnnie Ray appeared in a concert, and in 1959, the Carl Rosa Opera Company played a week at the theatre.

In 1974 an application to convert the Granada into a bingo club was refused, and the Granada had become liability to the company. It was closed on 28th August 1975, when a fire damaged the stage end of the building. The films playing at that time were "The Wilby Conspiracy" starring Sydney Poitier and "Mixed Company" starring Barbara Harris.

Despite the fact that a bingo licence had now been approved, and the town was also looking into providing a live theatre, the Granada was demolished, and an office block was built on the site.

I recall going to the Sutton Granadiers on a Saturday morning which cost 1/6 or 7.5p. Apart from the rising cinema organ, movie shorts were shown. My regret was not visiting sooner. Saw Mary Poppins for the second and third time there but did not enjoy Fantasia.

The Liverpool Spinners performed a one off concert there close to the eventual closure and as I recall it was a full house.