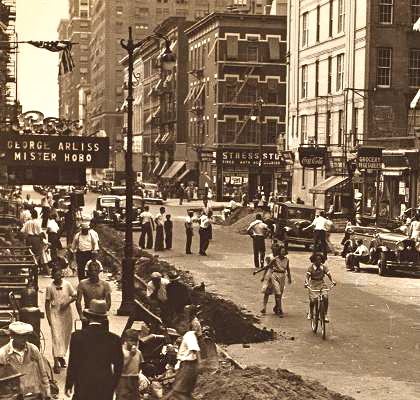 The Rose Theater was a short distance from the apartment building where I lived at 128 W. 102nd Street. I had to leave it to go fight in Korea. When I returned, my home and all the surrounding blocks had been destroyed, razed to make way for a new complex of housing projects. Nothing was left, except a couple of churches and schools. When I saw the decimation, I cried. I felt as though we had lost the war and the enemy had won. My mother had moved to Brooklyn, but I was never comfortable there. The Rose was the neighborhood theater, showing mostly re-runs, but the price was right for people who were just trying to survive the Great Depression. The Rose had a lot of give-away nights, when you’d receive a prize with the purchase of a ticket. The most popular night was “dish night”. Each give-away featured a different dish. Maybe you’d get a cup one night and then a dinner plate the next time. Everybody got their full set of china from the Rose. Of course for glass-ware, you’d use the empty jelly jars. Not High Society, but it worked. All our neighbors gathered at the Rose, where we enjoyed the movies, the talent shows and the singalongs. Baskets of food were awarded to the folks with the winning tickets, which were life-savers for the hungry families. The above photo shows the street, as it was being dug-up by the WPA workmen,laying new water or sewer pipes. The photo also shows some girls walking and riding bikes. These girls could very well be my two older sisters. The Rose finally closed it’s doors at the beginning of World War 2. The bricks and mortar may be gone,
but not the memories of that tiny theater that was a part of my community and a part of me. Thanks for the memories, Rose.