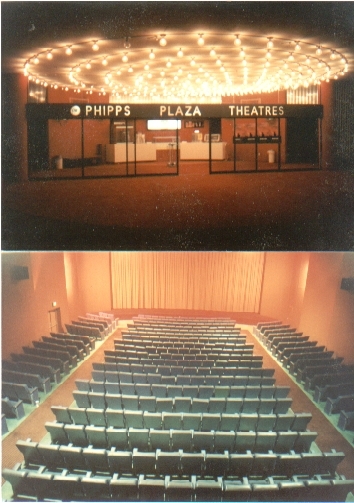 This is the Phipps Penthouse Theater which by the time this photo was made had lost its identity and was just lumped in with the downstairs theaters. Note the lettering of the word PLAZA and you can tell from the spacing that a longer word, PENTHOUSE, was once there. At one time there was a round open air boxoffice about where you can see the doors open. The 550 seat auditorium was unchanged during the entire 17 year life of this house. It opened on 12/26/1973 with The Exorcist.

To bad they did not put in a D-150® or Ultra Vision® curved screen when It was a big single theatre. Plitt had these in many of their cinemas. Must have looked so bad when they split the place and put in a small screen way hi up. Thanks Jack for the photos.