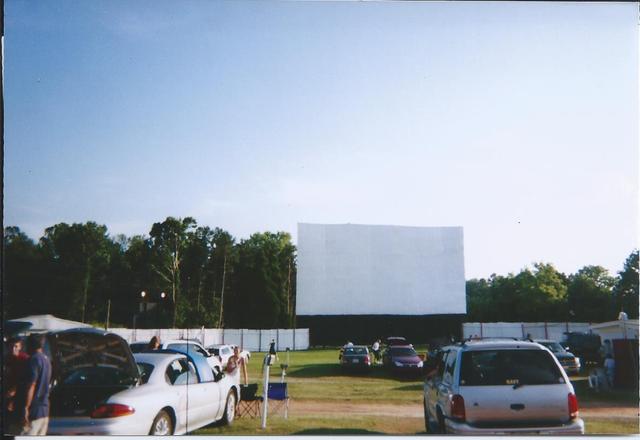 I am so shocked and saddened to hear of Peggy’s passing. I would like to extend my condolences to her family. She was such a nice friendly lady who took the time out to talk with us and actually allowed us inside the booth. And what a thrill that was for me! She fully explained the daily operation/maintenance of the drive-in and the booth as well as the procedure for booking films (she wasn’t very happy with Disney’s exhibition policy for their films at drive-ins!) She also gave us a history of both the Belmont and the projection equipment. You’re right Mike! She did let Charlie make an adjustment on one projector. I think it was the film guide/roller that was about to come off and Charlie tightened it. We would drive up from Tampa each year during the summer for the Western Film Fair in Charlotte. That’s where we would meet up with Mike. We stayed at least 3 nights in Charlotte but we always saved one night (usually a Friday night) for our much-loved trip to the Belmont. It was surely worth the drive from Charlotte to this wonderful drive-in. I am certain Peggy is now watching over her family as well as her beloved Belmont!

Nick, we saw the PATRIOT there with a Disney First feature,Remember.How did they pull that one off.LOL.

The Belmont Drive-In’s spring reopening was delayed due to storm damage – but they’re opening in a couple of weeks! http://www.gastongazette.com/news/count-57988-teresa-drive.html

There was an ad in the Gastonia newspaper about the showing of Steven Spielburg’s 1982 hit “E.T.” which played here first-run on Friday June 11, 1982. In fact, it also played first-run at the Gaston Mall Theatre so it played in two venues in the Gastonia area. So

thanks raysson…guess digital will close this one….

I just heard the BELMONT is Closed……really strange it always had them packed in,,Maybe the couldn’t afford the UPDATES, maybe someone local will CONFIRM this/…

From the Gaston Gazette: The Belmont Drive-In Theatre’s days as a viable business may have cruised into the sunset. Longtime fans get the itch to head to the beloved venue every year around this time when the weather turns warm. Visions pop into people’s heads of paying a mere $10 per car to watch a movie outdoors, under the stars. But owner David Lawing said the drive-in’s future at 314 McAdenville Road is more uncertain than ever. “We used to always try to be open around March or the first of April,” he said. “We’re trying, but I don’t know if we’re going to be able to get it back open or not.” The problem is one that’s been sneaking up on Lawing for years. The film industry is moving away from distributing movies on 35mm film, instead converting to a digital format that involves sending DVD-style discs to operations like Lawing’s. The Belmont Drive-In still uses the same, trusty projector that Lawing’s father, Bill Lawing, used when he ran it as a teenager decades ago. He and his wife, Peggy, continued using it when they fulfilled a lifetime dream and bought the drive-in nearly 30 years ago. But the conversion means Lawing will need a digital projector to continue showing new and recent releases from most studios. He said buying and installing that type of high-tech equipment would cost upward of $100,000 — money he doesn’t have. “It depends on whether or not we can swing financing to get a new projector,” he said. “We may not ever open again.” Film companies began moving away from 35mm prints last year and said they planned to completely do away with distribution last December, Lawing said. A post on the drive-in’s Facebook page last October reflected the growing dilemma. “We will be closed this weekend due to no 35mm prints being available,” it reads. Some of the film companies are doing away with the old film more quickly than others, but Lawing said the problem has become too big to work around. Myriad other problems have plagued the drive-in since 2011. It’s become routine for the outdoor cinema to open late in the season, shut down before warm weather ends, or sometimes close a couple of weeks in the middle of the summer. In 2011, storms damaged the large movie screen and roadside sign, requiring extensive repairs before the venue opened in June. In 2012, the Belmont Drive-In opened relatively on time but had to close unexpectedly for several weeks due to a faulty well on the property. It shut down again that year because of a rotten utility pole and other electric issues that were costly and time-consuming to fix, Lawing said. The bad well caused the drive-in to shut down early again last fall. Lawing said he’s holding out hope that he, his brother and his sister can upgrade the drive-in’s technology and stay in business. He is not confident. Closing permanently would pain him, he said, considering his family’s long ties to the business and nostalgia that exists there. “Everything’s up in the air right now,” he said. “It will be a big letdown if we can’t do it.”

sad, not a bad place, close to the interstate,concession and rest rooms really run down.