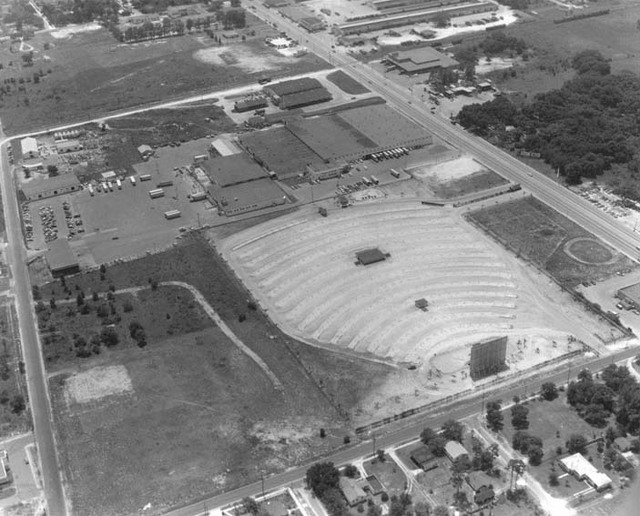 Since the installation of digital projectors the theatre has only operated two screens.

Nick do you know if the theater went digital? I hated this and all the drive-in that Floyd theaters owned except the 20th Century. They wanted the screens filled at all times so if a film was in scope it was off the screen into the bushes. Digital would have solved that.

Mike, I haven’t been to the Fun-Lan in 6 or 7 years so I can’t say for certain if they’ve gone digital on all 4 screens. But according to an article published in the summer of 2013, they had recently installed one digital projector (more than likely for the original large screen) and were considering adding a second one. At that time the manager was quoted as saying, “there’s no alternative. You either are going to have to do it or you’re out of business. I’d hate to see the drive-in go out of business.” So by now I suspect they’ve gone digital on all screens.

Grand opening ad in the photo section and below:

Nick or anyone do you know if they have gone digital since my last post in 2015? Also, can they now show aspect ratio 2.35 on the screen rather then off the side of the screen. I Hated that

We went quite a few years ago and saw Wall-E it was on the screen to the left of Screen 2. I have to agree with the arrangement of the screens it definitely is distracting and with no markings on how to park it makes for a lot of chaotic parking. They could at the very least on the 3rd and 4th screens that where added come up with a parking arrangement. The most they could do is either get rid of those 2 side screens or purchase some more land and make proper ramps. I realize to screen 1st run features nowadays movie companies require you to run them longer so it advantageous for a Drive-In theater to have as many screens as they can to be able to keep the crowds coming. Takes a lot more finesse to run a Drive-In theater than a Indoor Multiplex.

Fun-lan is now a 2 screen theater. Learned this when I attended tonight. When they switch over to digital they only purchased projectors for their 2 largest screens. Screen 4 and its tiny projection booth are completely gone. Screen 2 is still up to the right of screen 3 (which is the original screen from the single screen days) screen 2 is no longer used. Please change the above to 2 screens.

Also I doubt this theater has the capacity for a 700 cars anymore with the addition of the awnings and other structures. I would say 600 at the most.