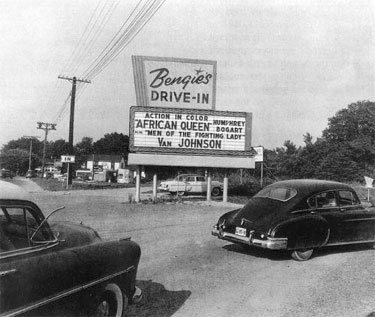 Bengies Drive-In opened on June 6, 1956. The screen is 120 feet by 52 feet and is the biggest theatre screen remaining in the USA or North America. At opening it had a capacity for 1,000 cars. There was also an enclosed seating area for 60 walk-ins. The current capacity is for 750 cars.

Designed by architectural engineer Jack K. Vogal for the Vogal Theatre chain. He designed and built many drive-in’s in the North-east US and also built the first drive-in theatre in South America, the Auto-Cine Drive-In in Lima, Peru in around 1954.

He designed and built all three drive-in’s in the Vogal Circuit, the other two being:
The Dublin Drive-In in Dublin (Columbus) OH
Salem Drive-In, Salem, OH

this is the worst drive in theater ive ever been to. the man talks all over the radio during intermission when he is showing short subjects like the 3 stooges where you miss key points in the plot. mr vogel please funnel cakes and hot dog specials can wait to be mentioned during a preview and not a classic short like the 3 stooges.

Picture of the screen:

Looks like a stiff wind could knock this thing down…..

How dare some one talk over a 3 Stooges short. Unless it had Joe in the short.

I have some current photos of the outside of the theater on my blog, as well as some information! I agree with some of the posts though, I was not a fan of the commentary over the credits and film shorts.

The Bengies has made the conversion to digital projection.

It’s strange that the summary here, at least partially written by “D. Edward Vogal”, spells that last name consistently with an A. Every other reference I can find, including CNN, the Baltimore Sun, his signature at the end of a lengthy complaint about the Baltimore Sun, and even the Whois record for Bengies.com – they all spell that name Vogel with an E.

FWIW, its first appearance in the International Motion Picture Almanac was the 1957 edition, in which it was listed in Middle River, spelled as Bengie’s, capacity 585, owner Frog Mortar Corp. That listing stayed the same through 1966.

This Drive-In Is One Of The Survivors That Still Has The “Welcome To The Bengies Drive-In” Snipe From The 1950s Today.

@archie1959 true joe was the worst of the three stooges.

The opening date seems a bit iffy, however if that was correct then the opening films were “White Feather” and “The Warriors” (Errol Flynn).