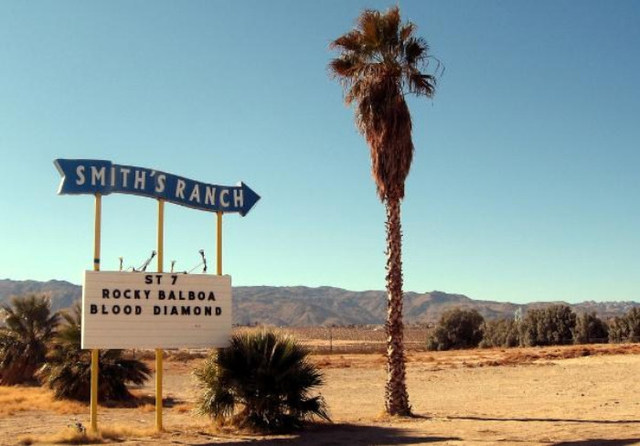 The Clemon’s Drive-In opened in March 1956. This drive-in is still open and has a capacity for 330 cars.

here is more helpful info about the smith’s ranch drive-in for those who haven’t seen it. it can be seen here by clickin this link:
http://www.flickr.com/photos/rixpix1/224698164/

Yes Lost, it is but its a great shot of the marquee though.Nice shot of the Smith Ranch sign also posted earlier.

I don’t see any evidence of any drive-in in Twentynine Palms existing before this Motion Picture Herald note from March 31, 1956: “Bill and Prudie Underhill have opened a new 450-car drive-in, the Starlight, in Twenty-Nine Palms.”

Is there an actual Smiths Ranch? Is there really 29 palms trees?

A quick Wikipedia search revealed that Twentynine Palms was named by surveyor Col. Henry Washington who saw the trees there. A quick Google search turned up a page all about the history of William Q. “Bill” Smith’s ranch.

The Motion Picture Herald of Sept. 8, 1956 showed that the Smith’s Ranch did exist already. Its note: “The owners of the Smith Ranch Dr.-In at Twentynine Palms, Mr. and Mrs. Art Clemens, plan to open a new drive-in in Kingman, Ariz.” Not sure whether that became the Sage there, which opened just a couple of weeks after that note and was owned by the Lang Theater Corp.

Boxoffice, Jan. 28, 1956: “TWENTYNINE PALMS, CALIF. – A mid-March opening is planned for Clemon’s Drive-In, a 365-car installation here, being built and to be operated by Art and Deldee Clemon. Designed by architect J. Arthur Drielsma of Los Angeles, the ozoner will feature a 60-foot screen, individual car speakers, snack bar and playground for the smallfry.”