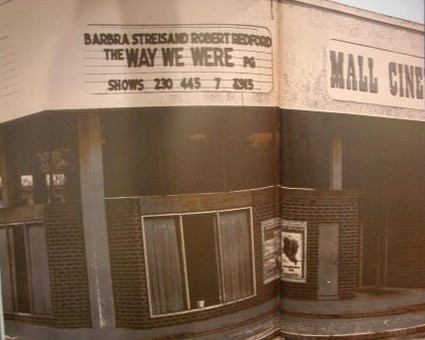 Originally one large screen split into two smaller screens. The Mall Cinema was opened by Stewart & Everett on July 9, 1965. It was twinned on June 8, 1978. Closed and reopened for private use of Bob Jones University. I saw “Carrie” there and remembered the group gasp of everyone in the theater when the hand reached up out of the ground in the final scene of the film.

The theater was of the modern type with a semi circle apron in front of the screen.

Wade Hampton Mall was located, appropriately enough, on Wade Hampton Blvd between Batesville Dr and Karen Drive. The theatre was seperate from the Mall

The Mall Cinema opened in the Summer of 1965. I was one of the first ushers hired to work there. Theater Manager was Mr. Flow. One of my classmates at Wade Hampton, Lenny Flow, was a relative. We had a good group of workers at the Mall. Biggest hits when I was working there were “The Yellow Rolls-Royce” and “what’s New, Pussycat”.

I forgot to add that Lenny was one of the ushers. Also working there were Ronnie Reese and Maria Sizemore.

Was the MALL CINEMA operated by either Stewart & Everett Theatres or was it operated under Martin Theatres and later on under Carmike Cinemas.

This was opened on July 9th, 1965 by Stewart & Everett. Its grand opening ad can be found in the photo section for this cinema.

June 8th, 1978 ad for first showings as a twin also in the photo section.