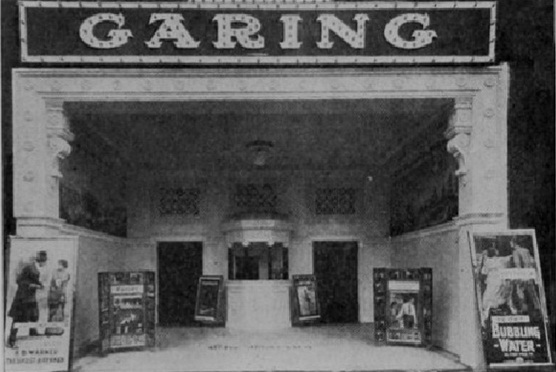 The Garing Theatre opened on April 19, 1915. The Garing Theatre was closed August 4 1925 following a fire. (although it was still listed in the 1929 Film Daily Yearbook with 700 seats). It was converted into retail use. The building was destroyed by fire in 1938.

Charles Garing began the silent-era Garing Theatre at 115 North Main Street in 1915. The theater closed for repairs in 1920 after a fire. It became part of the Southern Enterprises Circuit. It closed August 4, 1925 after fire gutted the projection booth and flooded the auditorium. Southern Enterprises had recently opened the Rivoli and announced that the Garing space would be retrofitted for other retail operations which appeared to happen in 1926. The space was used to advertise other theaters in the interim. The former theater’s building burned down in 1938. Demolished.