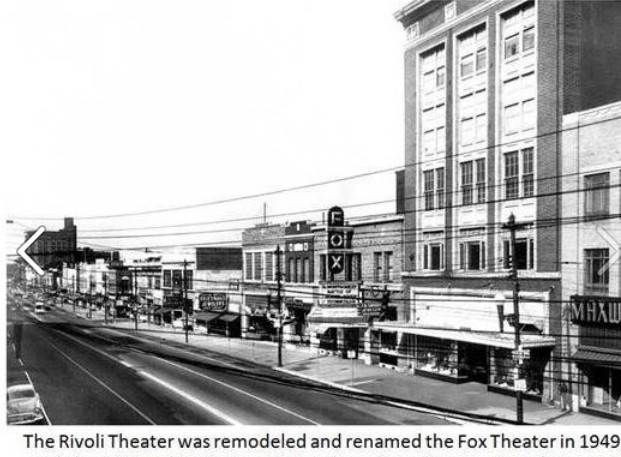 The Rivoli Theatre was opened on September 7, 1925, with seating listed as 744. It was operated by Publix followed by Wilby-Kinsey. It was renamed Fox Theatre in 1949 and was closed in 1978.

The Roxy theater was down the street on corner of South Main & (Washington St. ?) across from Ivey’s. It was no longer a theater by 1966 when we moved to Greenville & probably was converted to a retail store. I’ve seen a pic on Ebay from 1951 when it still was in business. Someone should make an entry for it. I’m sure someone can give a history of it. I have a pic from 1950s showing its marque & the Fox & Paris made from Otteray Hotel.

The guy from Augusta GA asked why somebody didn’t try to save a couple of those downtown theaters. Fact is, downtown Greenville nearly wasted away at one point with virtually every big-ticket store closing at some point. The theaters had no patrons. Everyone was going to the theaters at the various malls that surround the city. I agree a Main Street theater would definitely be a worthy venture at this point in time. Since the building where the Fox Theater was still stands, it’s a viable location.

I was in a local movie made in Greenville primarily as a ego production. My mom paid $10.00 for me to perform. Several of my classmates also were in the cops and robbers movie only shown at the Paris theater in 1951 and 1952. Whatever happened to Pete’s Hot Dogs that use to be next door to the Roxy, corner of North and East North? I was “addicted” to their hot dogs? My brother and I went to The Carolina, Fox, Center, Paris and the Roxy every Saturday. Fond memories.

A survey of Greenville’s architecture for the NRHP says that the Rivoli Theatre was designed by the local architectural firm Beacham & LeGrand (James Douthit Beacham and Leon LeGrand.) It says that they also designed a house called the Piedmont Theatre. We don’t have a Piedmont Theatre listed for Greenville, and I’ve been unable to discover when it was operating or whether it later operated under another name.

scmovietheatres and the Greenville County Historical Society’s book Remebering Greenville both say that the Rivoli Theatre opened in 1925. The book also notes that the Rivoli became the Fox Theatre in 1949. The Fox remained in operation the longest of any of Greenville’s Main Street theaters, finally closing in 1978 according to an article quoted on this page at Greenville Film House.

I just noticed that in this 1925 photo (linked earlier by Lost Memory) the Rivoli’s marquee says “Gala Opening Sept. Seventh.”

I loved Greenville then, I love her more now. You folks make my heart sing talking about the places that made me happiest in my formative years. My only regret is the ravages of time are probably going to keep me from returning. I guess it is true. You can never go home again. However, I can still live thru you fine folks. Thanks!