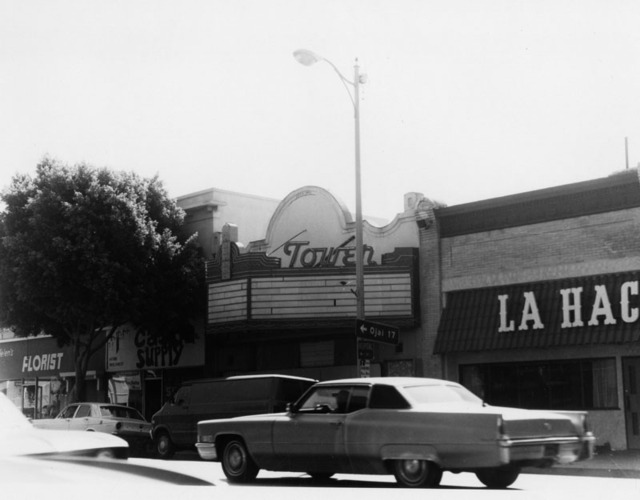 Opened in 1926, the Mission Theatre became the Lyric Theatre from 1937 - 1938, then Columbia Theatre. It was taken over by Fox West Coast Theatres and renamed the Tower Theatre in 1941 - 1949 and operated through at least 1968. It was the Fox Tower Theatre at one point but now sits on the main drag of the small town of Santa Paula, marquee lit for holidays with a mural illustrating a day at the Tower in years gone by. There’s been some talk of renovating it and it’s in reasonably good shape, but no substantive strides thus far.

This theatre was renamed the Columbia sometime before April of 1931. The April 17th, 1931 issue of Southwest Builder and Contractor tells of a remodeling of the Columbia Theatre in Santa Paula, which had just been purchased by a Mr. J. Leslie Asher. New drapes, seats, projection and sound equipment were to be installed.

On a recent trip on the Filmore and Santa Paula Railway from Filmore to Santa Paula I had the opportunity to walk along Main Street in Santa Paula during the hour lay over. During the stay I noticed the Tower Theatre. The marquee was still intact but the entrance was entirely boarded up. There is not much to see of the theater but the train trip was enjoyable.

There is (or was) a Tower Theater in Willows, CA. It should be added if it isn’t here under another name. Here is a picture from the UC Davis Collection:

Has Anybody seen it latley or know whats happen to the tower?
I was just wondering i maybe in that area in the next couple of day and was wondering if it was worth a look?

According to this 2007 post in the Santa Paula blog, the seats were removed from the Tower and the floor leveled sometime around 1993. The building is owned by the city of Santa Paula and the city’s plan is to have a retail shop or a restaurant in the building.

In a July, 2007 article in the Ventura County Star, City Manager Wally Bobkiewicz was quoted as saying of the 1926 structure that “It’s not a historic building and it can’t be used as a theatre anymore.” He added “The only use it’s had is the 1950s neon marquee, where we put holiday messages at Christmas.” Maybe that signals an intent by the city to save the marquee. But the last I heard the building is still vacant.

We drove around Santa Paula yesterday. It’s an interesting little town. Here is a picture of the Tower:
http://tinyurl.com/6kvud6

It was the Columbia in 1930, according to this LA Times ad:
http://tinyurl.com/2erxqx

A historic resources survey of Santa Paula (enormous PDF here, though there are only a couple of pages about the theater) says that this house was the Electra Theatre in the 1910s. We have the Electra Theatre listed at 118-120 E. Main Street. It’s possible that Santa Paula went through a renumbering at some point, or it is possible that the Electra Had two different locations, but I think the renumbering is much more likely. Modern 118-120 E. Main is well outside the town’s historic business district and is surrounded by mostly modern residential or industrial buildings. In the 1910s it was probably just scattered houses and small orchards, which would have been a very unlikely location for a movie theater.

There was a proposal to build a new theater in Santa Paula in 1919, noted in the June 25 issue of Building & Engineering News, but I haven’t yet discovered if it got built or not. It’s possible that it was a new home for the Electra, and is the building standing today.