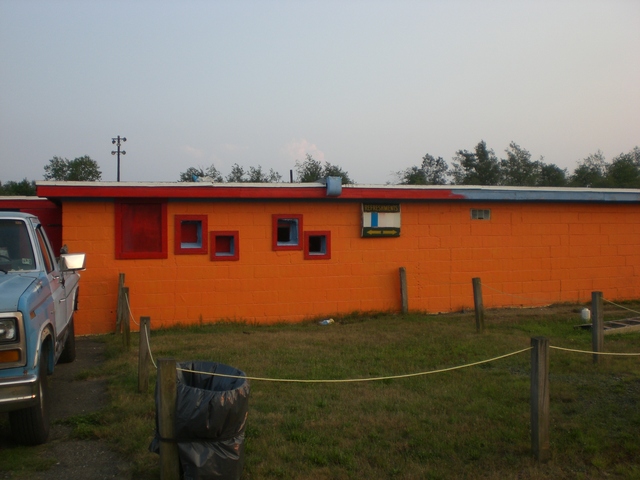 The Laurel Drive-In opened June 24, 1950 with “Mother Wore Tights”. This single screen drive-in has a capacity for 500 cars. It was closed at the end of the 2017 season due to lack of a digital projector.

The Laurel dr-in is located on route 309 as approaching Hazleton from the south. It’s now owned & operated by Frank Sacco who lives in front of the dr-in. I know Frank very well and he’s not sure if the dr-in will survive the digital upgrade.

The address in the header is correect according to their website: 1024 S Church St, Hazleton PA 18201

They have not made the conversion to digital projection as yet but plan to for the 2015 season.

The Monkees ‘Head’ had its first regional showing here in July 1969. The 2nd feature was Pendulum with George Peppard.

A Coming Soon ad in The Plain Speaker of Hazleton (June 8, 1950) drew a parallel to horse races at the Mount Laurel Race Track 50 years earlier. (Turns out it was built on the race track site.) Maybe some of these names will help some future researcher. The ad read: The final lap of the race to completion at Laurel Drive-In was in full swing on this warm, summer day. (Tuesday to be exact). Pete Yannes, general contractor and designer is well out in front of the field and setting the pace. Screen Erector Hospidor is lagging behind a little. Plasterman Frank Landro is moving up fast pushing Al Yannes and Ray Marchetti riding two carpenter horses. Plumber Louis Uvino sees an opening and with a gust of speed plugs up the leak, fast chasing Clewell and Vogt who are trailing in 7 and 8 positions because they stopped to admire a roof of huge concession stand. Fedulla is electrifying the crowd of curious well wishers and tradesmen by generating more speed and brightening up the way for Sacco and O'Donnell to see the light of day across the first line painted by Krohn Bros.

The Laurel’s official grand opening was Friday, July 14 with The Adventures of Robin Hood. The Plain Speaker wrote that the “500-car outdoor theatre (was) owned by Charles V. O'Donnell and Anthony D. Sacco”. It offered RCA in-car speakers and “an all-metal screen over 60 feet high.”

The 1952 Theatre Catalog said the Laurel was owned by Anthony Sacco. According to its Facebook page, the Laurel has been owned by the Sacco family ever since.

In July 1956, owners O'Donnell and Sacco announced a new sound system, extra speakers, and free mini-golf for drive-in patrons. In October 1959, O'Donnell and Sacco, “trading as Laurel Drive-In Theater” were in court about a theater in Tamaqua. A July 1967 article in the Hazleton Standard-Speaker said the drive-in was still owned by Sacco and O'Donnell.

A windstorm blew the roof off the concession stand and damaged the screen on Sept. 10, 1968, and about 50 speaker posts “were torn from the ground”. Sacco and O'Donnell were mentioned as joint owners. So whatever happened to O'Donnell?

A 2014 photo caption said that Frank “Chic” Sacco opened the Laurel in 1950 and his son, just plain Frank Sacco, is the current owner. But a 1952 article in The Plain Speaker mentioned John “Chic” Sacco who chaired a charity drive. How are these folks related to Anthony?

For the 2017 season, the Laurel still hadn’t converted to digital projection. Based on its Facebook posts, it opened in mid-May, closed in mid-September, and except for two classic horror weekends showed only three movies all season – Baywatch, Wonder Woman, and Transformers: The Last Knight.

My family (Sacco) built and operates the Laurel and the now-closed Motor Vu. I can help answer any questions you may have.

For one, Anthony Sacco Sr. was my grandfather. He built the golf driving range there first (ruins of which are still visible near the restaurant building and under the screen), then the restaurant and finally the drive-in. On his death in 1971, his sons, Anthony Jr. and Frank, succeeded him in operating it, and now Frank Sacco is the sole owner and operator.

did not open for the 2018 season as they are looking for a digital projector. they also said they might not reopen for the 2019 season. should be listed as closed. the website also says closed thank you for the 2017 season!