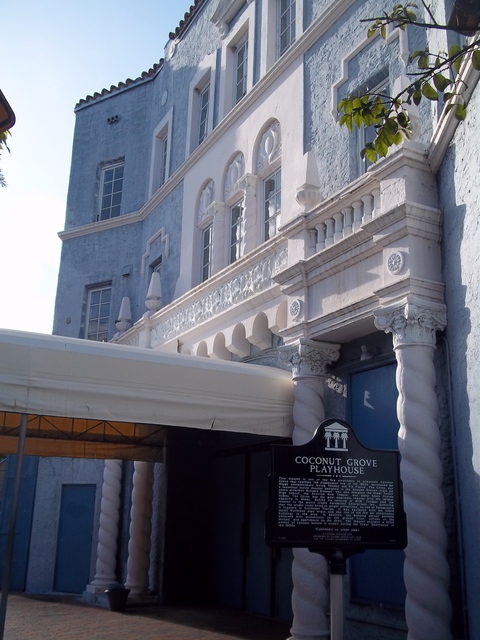 The 1,500-seat Coconut Grove Theatre was originally built as a majestic movie palace in 1926 and opened on January 1, 1927 with Adolphe Menjou in “Sorrows of Satan”. It was closed during the Depression, reopened on October 3, 1930 with Ginger Rogers in “Queen High” & Harry Gribbon in “A Hollywood Star”. It was equipped with a Wurlitzer theatre pipe organ. It was closed during World War II and following a remodel to the plans of architect Alfred Browning Parker, it reopened as the Coconut Grove Playhouse on June 3, 1956 as a performing arts center with Samuel Beckett’s play “Waiting for Godot”. The theatre later converted to two stages for live theatre use.

The theatre closed in April of 2006 and its future is uncertain.

Miami New Times article about the current state of the Playhouse:

The latest I’ve read from December 2016 says the plan is to keep the façade of the Playhouse but to construct a different theater inside instead of restoring the interior:

“To Be or Not to Be (small): Is Size Key to Grove Playhouse Revival?”

I have uploaded photos of a historical marker that was placed next to the Playhouse entrance sometime in the past year or so.

Wow, back in the 90’s I’d walk past the sort of sealed up parts of the exterior of the façade along the sidewalk and wonder if there had been stores or something there, and if you look at the photo from the 1920’s it turns out they were storefronts.

For a year or so in 2014, the Blue Starlite Mini Urban Drive-in, now in Palmetto Bay near the Deering Estate, was located in the parking lot behind the Playhouse:

There are descriptions of the renovation project’s progress from the county’s point of view on the Miami-Dade County Department of Cultural Affairs Coconut Grove Playhouse Project webpage.

Click here for a local CBS News interview with a preservationist from Save Our Playhouse and a lawyer representing people against the building’s demolition regarding the current state of the Playhouse after plans to redevelop the site were voted down.

Miami Mayor Suarez has vetoed a plan that would have demolished the auditorium and kept the historic façade.

In hopes that the entire building can be preserved and restored, the mayor and supporters of the veto, Save Our Playhouse, are asking people to attend the next City Commission meeting this Thursday May 23rd at 9am to urge that the veto be upheld and not overturned.

Detailed Miami Herald article from May 18th, 2019 about the current state of the situation and the politics involved:

Mayor Suarez announces his veto while standing before the Playhouse in this video.

Video of full announcement. (Playhouse is off-screen to his left.)

The mayor’s veto was upheld, as reported in this local channel 10 news video, which includes quick historic photos, a description of the situation, and comments from players in the city’s dispute with Miami-Dade County that is still ongoing and may be settled in court. 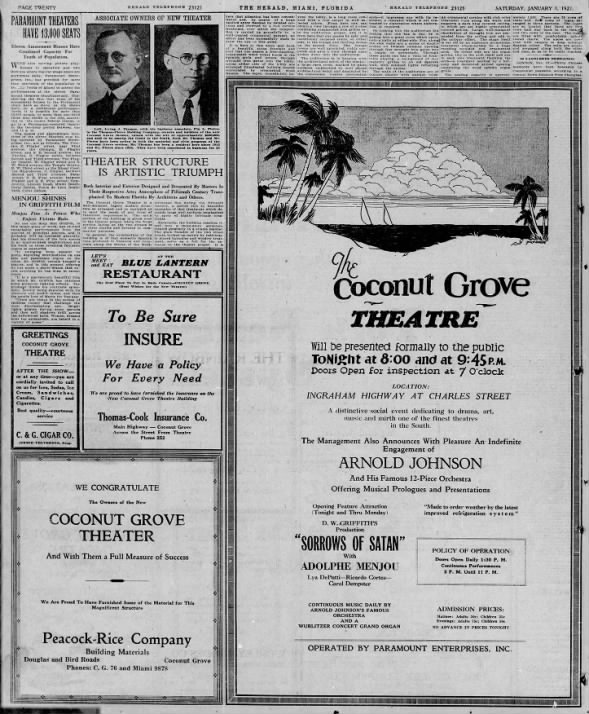