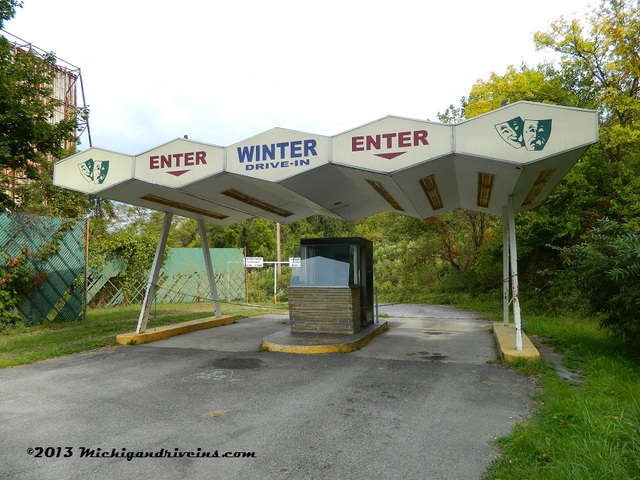 The Winter Drive-In opened August 29, 1969. This drive-in has four screens and a capacity for 1,000 cars. It reopened July 21, 2017 operating with only two screens while it fully updates to digital projection. By 2018 a third screen had been converted to digital projection. Conversion of the fourth screen was pending, but never happened and it was closed on June 30, 2021 with “F9:The Fast Saga” & “Nobody” on Screen 1. “Peter Rabbit 2:The Runaway” & “Jumanji:Welcome to the Jungle” on Screen 2. “The Conjuring:The Devil Made Me Do It” & “The Hitman’s Wife’s Bodyguard” on Screen 3.

The Winter Dirve-In has made the conversion to digital projection.

Due to the depressed economic conditions of the area the Winter Drive-in has not converted to digital projection. They plan to open a couple of screens for the 2016 season with what limited 35mm film is available.

They currently have ONE screen functioning as of May 24th, 2017. They are showing Baywatch and last years Jack Reacher movie. They started a Go Fund Me page back in April of 2017.

As of right now the Winter Drive In is temporarily closed until mid-July. They have received two Christie Digital Projectors and they are currently upgrading the projection booths for screens #1 and #3 and have ordered a 3rd projector for screen #2. No word on screen #4 yet but this is still great news!

Our Projected Re-opening Date Is Friday July 21st. We’ll have screens #1 and #3 open with new digital projection and digital sound. The opening date of screen #2 will be announced soon. While the drive-in still needs a quite a bit of T.L.C., the digital upgrade has been a major expense and should be seen as a good indication of things to come.

The Steubenville Herald Star, Feb. 28, 1969: The Steubenville-Wintersville area is getting a new drive-in theater. Work has been started on the outdoor movie center … the theater is being planned and constructed by the Skirball Investment Co., a Cleveland based operation … the theater will be named “the Winter Drive-In”.

The Winter didn’t appear in the International Motion Picture Almanacs through 1976. The 1978 IMPA had it, capacity 1000, owned by Skirball, who stayed the owner through the final list in 1988. The IMPAs showed it with two screens by 1980.

They are currently open and digital on 3 screens. The 4th screen is still dark, and they have stated it is possible that they will convert the 4th screen this year but that they “need to take care of a lot of deferred maintenance.”

Does it only open in Winter?

…and they are closing partly into the 2021 season

On their facebook page it says they are closing permanently. :(

It’s going to be torn down.