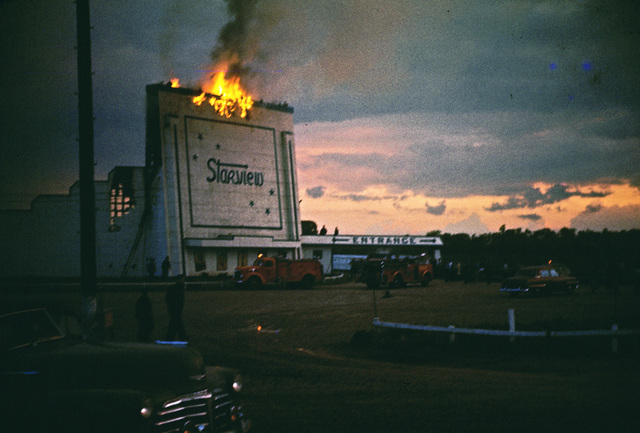 The Star View Drive-In opened on October 1, 1949, featuring the 1948 western “Corner Creek” with Randolph Scott, Marguerite Chapman and George Macready. It was opened by Jerry Steele and Lou Ratener with Ernest Plitz as the theatre manager. In September of 1956, Steele bought out Ratener’s interest in the drive-in theatre. The drive-in has a capacity of 520 cars with in-a-car speakers. In the early-1950’s, one way to get moviegoers to patronise the drive-in during the fall months was to give them a coupon for one gallon of gas at the nearby gas station. The only condition to receive the coupon was that the temperature had to be less than 40 degrees. On May 17, 1953, the wooden screen tower burst into flames while patrons were sitting in their cars watching the show. The people were given ‘fire checks’ for another show. The damage was estimated at $18,000. The wooden screen tower was rebuilt.

Here is a more recent view of the marquee:
http://tinyurl.com/ybzlt6b

“Gusting winds toppled the screen at Starview Drive-In Theater” on December 15, 1971 according to the Norwalk Reflector’s story the next day. I’d guess that’s the off-season disaster date and not early 1972.

Rick Myers Jr., 17, Monroeville, said he was replacing fencing along the west side of the theater when he heard the screen “creaking.”

“I looked up and saw the tower (screen) shaking and I thought the wind wall (fence) was going to be blown over,” he said.

As the screen started to fall, “I ran as fast as I could.” Myers, a theater employee since March, was securing the theater for the winter off-season at the time.

Is it known how the fire started?