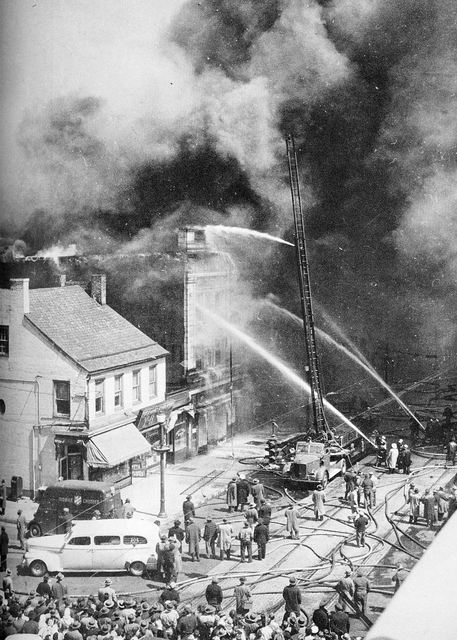 Simple on the outside, yet beautiful on the inside. The Rialto Theatre opened April 2, 1921 with George Arliss in “The Devil”. It closed in 1979, the interior was gutted and converted to storage space in 1980.

Later the auditorium was demolished, leaving just the front and foyer area.

I lived in Allentown during the mid-1980’s. I remember watching the wrecking ball smash into the side walls of the Rialto’s auditorium. I remember the box seats and balcony being exposed as I watched from accross the street. The wrecking ball kept slamming into all that decorative plaster…..I remember feeling sick as I watched this theatre get torn to the ground. I lived on 8th Street at the time……and shortly after they tore this movie palace down…they tore one down that was on 8th street accross from my townhouse. I watched that one get demolished also ( can’t remember the name of it)…but I did sneak into the rubble and took a piece of decorative plaster that I still have saved in a showcase. Allentown does not treasure its historic downtown…..and downtown was in pretty sorry shape last time I visited ( about 2003).

Aloha, I live in Hawaii and wes recently reading an old article in Reminisce Magazine from July/August 2001 about a fly problem in Allentown that was so bad the Rialto Theater was giving free admission to any children who came to the theater with 100 dead flies. The date given in the article was the summer of 1928, but I can’t seem to find any other articles on it. Would anyone have any insite? I know it was long ago, but I would love to write a more detailed article for some of the magazines in Hawaii.

Weida:
You may want to try the local paper, website is mcall.com. They’ve been around for about 100 years and may have something in their archives. They have an online archive, but only goes back to 1984. Not sure if they can help you given the fact of your location, but worth a try.

I remember going to this theater in the 1960’s- especially to se BAMBI. It still was impressively elegant, at least to a child, but I recall that the beautiful marble railings were absolutely sticky with grime, and the bathroom was FOUL.

I used to service the Air Conditioning in that building.
It should have never been razed.
The replacement building has been sold and is currently vacant.
Part of the original structure on Hamilton St. still remains.
Back in the day, the Rialto also had Bowling Lanes in the basement.
Thanks PPL for being so narrow-minded, and short-sighted.

The Rialto Theater was built on the site of an earlier theater that had burned down around 1916. That theater was named the Lyceum. The facade of the Rialto building that you see today is what was left after a remodeling. Originally the entrance building was a rather fanciful structure with a beautiful 1920’s marquee and I believe a large vertical sign that ran up the center front of the building. There was a rather disastrous fire in the Rialto office/lobby building, that I don’t think affected the auditorium structure too much, around October of 1957 (I think) during which the assistant fire chief of the City of Allentown fell through the lobby floor and was killed. I think the facade that remains today was what it was remodeled to after the fire. If I remember corrctly, the theater wasn’t really “gutted” after it closed, it just had the chairs removed and was used for storage, as is. I believe that the auditorium structure was razed during the summer of 1985 and it was at that time that a modern structure with some parking facilities was built on the site. The Lobby/office building was just remodeled and continued to be used as part of the larger building.

Two additional notes… I remember watching them demolish this theater and as the building was cracked open it was jut beautiful inside. I vaguely remember some type of domed ceiling (or what was left of it, that was encircled by a bas-relief design of classical figures. Other than that, it looked untouched on the inside. The other thing I wanted to mention was that one lingering piece of the Rialto was for many years located outside the Hess’s store at the South Mall in Allentown. When you went out of Hess’s into the mall, on the left hand side was a colossal marble sculpture that I think was of an angel holding another dying angel in it’s arms??? This statue was originally in the Rialto Theater. And what I was told was that it was so heavy that after many many years it had started affecting the structural integrity of the building. It was purchased by Max Hess and eventually ended up at South Mall. Is the statue still there? Does anybody know?

The statue was actually on your right went you went out into the mall. sorry for the error!

There was a hugs fire at the Rialto about 1945 or so and the entire building was torn down and rebuilt. The front was originally a 3 or 4 story building with the auditorium behind it.

When it was re-built the lobby was cut down to 2 stories and sometime later it was given a red granite facade.

About 1970 or 71 it stopped showing first run films and turned into a Adult Theater. I remember going in there when I was in High School and watched “I Am Curious (Yellow)” and some other skin flicks (they really didn’t show any nudity.. just “simulated” a lot of things you can watch online today for free. I remember one movie they showed this girl and a guy going into a car and then the car was “rocking”. LOL.. then they got out still clotheed.

I don’t believe the Rialto actually showed anything close to the pornography you can watch online now.

In 1972 is when the Marquee was taken down because of the canopys they were erecting on Hamilton Street when they tried to turn it into “Hamilton Mall”.