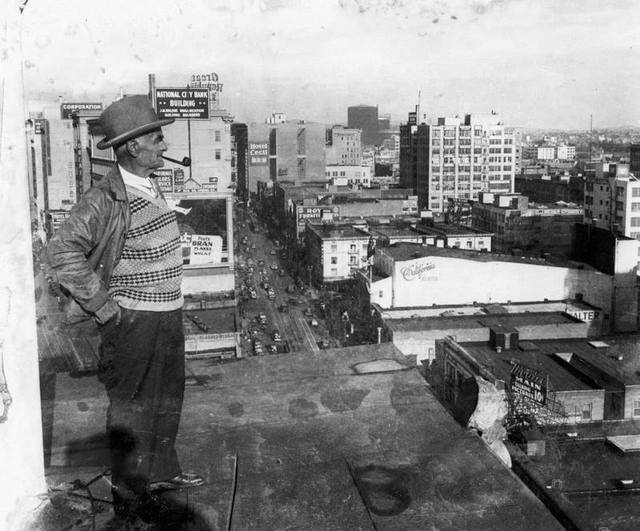 One of many theatres located on S. Main Street in downtown Los Angeles. The Main Theatre, located just a few doors north of the Regent Theatre. It was operating by July 1915 under the ownership of Fred A. Miller. The theatre had an attractively decorated 100 feet long lobby. It had gone from listings by 1941.

Currently (in early-2005) the building has been tidied up and awaits a new use as either retail, or due to the recent rennaissance of the area, it could eventually become a restaurant.

Here is the CT listing for the Admiral aka Vine:
/theaters/431/

vokoban: The Admiral on Main Street (AKA Rector’s Admiral) was a grind house, on the east side of the street, somewhere between the Regent and the Burbank. It was smaller than the Regent, but larger than the various storefront theatres in the area, so I suspect it might have actually been built as a theatre. It had a marquee of about the same style and vintage as the Regent’s.

When you posted the article about the Banner having gotten a new front in 1952 I thought that it might have become the Admiral, but I’ve seen comments indicating that the Banner was still the Banner into the 1970s, and the 1973 picture of it that Ken posted doesn’t resemble the Admiral. That’s why I now think it had to have been below 5th Street. I passed by it many times in the 1960s, and I’m sure I’d recognize it immediately if I saw a picture of it, but my memory has lost track of the exact location and other details.

Too bad there aren’t Sanborn maps after 1972 or 1973. Do you think the Chaplin reference above refers to the Hollywood Admiral? The name ‘Rector’s Admiral’ shows up in advertisements for an exact year in LA Times movie listings from Dec. 1958-Dec. 1959 but the problem is that they all refer to the Hollywood Admiral. Here’s an example:

Janet Leigh played a Russian pilot in the Wayne film. Howard Hughes had the hots for her at the time. Jet Pilot was the film that Hughes used to watch over and over again when he was holed up in the Desert Inn.

Drat. Maybe I conflated the proprietary name, or maybe Dave Rector owned both Admiral Theatres (in the 1930s he owned the Gordon Theatre on La Brea, so I know he had more than just one.)

Does anyone know the name of a theater at 523 S. Main inside the Waldorf Hotel? I have a graphic of the Sanborn map but want to put it on the correct page if there is one. The map only says ‘movies’ and the theater looks pretty large with a balcony.

523 S. Main was the location of the Gaiety Theatre

A little off topic here. The LAPL was guessing that this undated photo was on Broadway, but from the film “Street with No Name” I recognize this as the west side of Main between 4th and 5th, more or less across the street from the Main:
http://jpg2.lapl.org/pics45/00057466.jpg

Nice to see Star Pants Mfrs. is still in business. It makes it easier to pinpoint the theatre’s location, anyway.