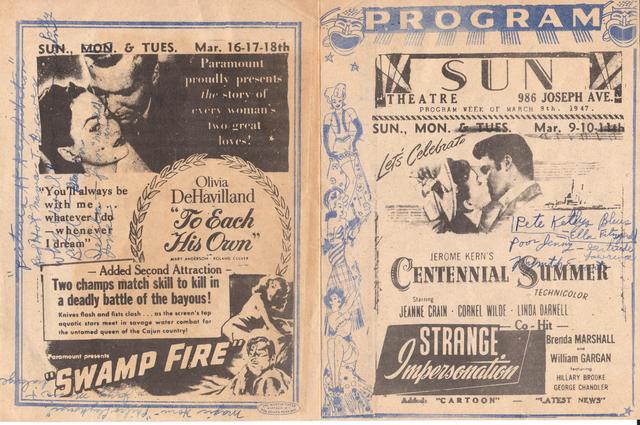 The Sun was my regular neighborhood theater from the time I was old enough to go to movies, about 1942, until my family moved to the suburbs about 1950. Saturday matinees cost 16 cents, which got you admission plus a little bag of free popcorn. The show was a double feature, newsreel, coming attractions, cartoon, and a serial. For me, it was the serial that was the big draw. I had to be at the Sun EVERY Saturday, or I’d miss an episode. Good serials were the ones with really clever and creative cliffhangers. I paricularly remember the Crimson Ghost serial, also Red Ryder, and Batman. At the Saturday show, which catered to a kid audience, at least one of the features was a B Western. I thought singing cowboys were a bore, was not a fan of Roy Rogers. I liked action and a bit of comedy. I was a huge fan of Tim Holt westerns, also of the Cisco Kid. (Getting to see Cisco and his sidekick Pancho in person, at a supermarket opening, was a highlight of my youth.) When you entered the Sun, the Manager’s office was on the right. The lobby held the big popcorn machine and the smell hit you as soon as you entered. I believe the candy counter was situated so as to be accessible either from the lobby or from inside the theater. There were two aisles, with the majority of the seats in the center section. The left and right sections only had about six seats per row. I remember both walls had comedy/tragedy masks — (made of plaster? or something like that — I’m not sure) — and these held the house lights, which went out when the show started. I seem to remember that the manager was a large red-haired middle-aged woman. About the post by Chuck1231: There was another theater about two blocks away; — It was the Cameo, on Clinton Avenue. I usually went to the Sun, but the Cameo was my second-choice place, a little further fo me to walk. Everybody walked to the movies in those days, because every neighborhood had its own little theater. Besides the Sun and the Cameo, I remember the World, which I think was on Central Avenu and Norton Street, where I went to see Nina Foch in “Dracula’s Daughter”. And my mom used to go to a place on Portland Avenue when she was a girl, where she saw silent movies in the late 1920’s. I’m not sure what the name of this one was — it may have been the Dixie. When I was a kid, my mom and my Aunt Anna used to go regularly to the Hudson, on Hudson Ave, for the “dish night” they had over there; — free dishes with the price of admission. I never used to go, because it was on a weeknight, and I wasn’t allowed to go to movies on school nights. They had better names in those days. Nowadays, everything’s the Cineplex 123. Back then you had the Sun and the Cameo and the World and the Dixie.

Here’s a link to a photo of the Sun, as it appeared as recently as 2007. View link

My mom says she used to go there in the 1940s, as well as the Cameo, Lyric, Empress, Strand, Loews, and Palace. I am thankful she took us kids to both the Palace and Paramount theaters shortly before they got torn down.

Most recently it is the home of GRACE UNITY FELLOWSHIP CHURCH.

I also used to go to the Sun Theater on Saturday afternoons and sometimes stay for two showings! I went with my friends, my sister, brother, mother, or grandmother. The Blob was the scariest film I ever saw there. All my family lived within walking distance. We lived on Baumann St, my uncle co-owned Otto’s Tavern on Remington St and lived upstairs (he lives on Weaver St now), one set of grandparents lived on Weyl St, and the other on Van Stallen St. It was such a vibrant neighborhood then—kids playing ball in the street, roller skating, sledding down Baumann Hill, etc. Now it’s just sad.

At least it is not a parking lot.

You’re not going to believe this, but my uncle was the other owner of Otto’s Tavern. I assume you’re talking about Otto. My uncle was his partner, Johnny Wroblewski.

We lived not only in walking distance of the Sun Theater, but within a stone’s throw. Literally. And I could reach it with that stone even though I was only about three years old at the time. I actually lived on the second floor of the apartment building directly opposite Joseph Avenue from the Sun Theater. My grandmother owned that building until the 1960s, and lived in the house behind it, at 65 Zimbrich Street. All of her buildings have been torn down now, but people still live on the property.

I have great memories of the liveliness and brightness of the street in front of the Sun, the incredibly appetizing smell emanating from that nut shop next door, and the jubilant roars of the crowd at Red Wing Stadium, which could clearly be heard from there on a summer night when the Wings were at home.

Hi, Greg. We are related by marriage! Johnny married my aunt Joanne. I talk to Johnny every week and hope to stop and see him around his birthday on July 16 with my two sisters. You should come! I think my parents lived in an apt across from the Sun when they were young. My sister Marcia would know all about it. Let me know if I can contact you through email.

Greg, I talked to Uncle Johnny today. He asked if you could give him a call sometime. He doesn’t know how to contact you.