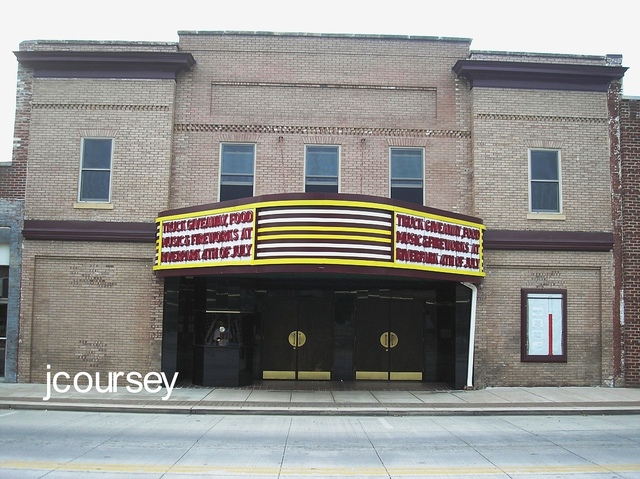 The Princess Theatre building, formerly known as the Imperial Theatre and Palace Theatre, on S. Cedar Avenue in downtown South Pittsburg, Tennessee, has been a landmark within this community for more than 82 years. The theatre’s operated here over those years entertained the local population since the days of the silent movies. Those days have long since past with the last movie being shown here in the early-1980’s.

The historic structure, with the exception of serving as a church for a short time, has, for the most part, sat vacant since that time with little or no maintenance. Decay set in once the roof started leaking, which took the once proud two-story structure to the brink of total collapse. Even the marquee over the front street entrance was not immune as time faded its paint while mischievous children and vandals broke out the neon lights surrounding it.

South Pittsburg was no stranger to motion pictures before the construction of the Princess Theatre building. In fact, the city not only had a theatre operating here as early as 1908, but also had a direct connection with at least two of the big screen movie stars. Tom Mix, who starred in dozens of early westerns, once worked in security and management at the local Penn-Dixie cement plant before leaving here for Hollywood. Jobyna Ralston, a native of the city, played the leading lady in many early films with many having been shown in South Pittsburg. This connection with early films and the need of a suitable building to house a motion picture establishment would lead to the construction of the Imperial (Princess) Theatre building.

In February 1920, Mr. R. F. M. Kirkpatrick acquired two lots fronting Cedar Avenue in the downtown block #3 with each measuring 25 by 140-foot for the construction of a theatre building. Construction began a short time later on a two story brick structure, which was designed and built by local architect, Mr. Reece B. Patton.

On or before Friday, July 29, 1921, the Imperial Theatre opened for business in the new building, under the management of Mr. O. C. Ogg. The opening film was the silent motion picture “Tank Town Follies”, starring South Pittsburg native Ms. Jobyna Ralston. The new theatre was an instant success and drew patronage from both, young and old alike.

The Imperial Theatre continued operations under the management of Mr. Ogg until he sold it to Mr. H. G. Jenkins in 1924. One of the first orders of business for the new owner was to give the theatre a new identity by changing its name to the Palace Theatre. The theatre opened under her new name the week commencing Friday, November 14, 1924 with the first feature movie being a serial titled “Beast of Paradise” chapter six.

In September 1929, the Palace Theatre along with the new Jackson Theatre at Bridgeport, Alabama six miles away, merged and began to show the same movies on the same days. Both theatres continued operations under their original names. That same year the first movie with sound, “Carnation Kid”, was shown at the Palace Theatre.

In August 1931, the Palace Theatre, which was still under the management of Mr. Jenkins, was closed for a short time by its owner so that a new Western Electric sound system like that of Chattanooga’s Tivoli Theatre could be installed. The Palace Theatre at South Pittsburg formally reopened on August 18, 1931 with its new sound system and new seats, which were installed during the shutdown.

In April 1934, Mr. R. T. Hill, the general manager of the Cumberland Amusement Company, announced that his company had recently acquired ownership of the Palace Theatre and that it would be operated after that as part of that company’s chain of one dozen theatres located throughout middle and east Tennessee. The company closed the theatre at South Pittsburg on June 1. 1934 for one month while conducting extensive repairs and remodeling. This included the beautification of the building’s front and the erection of a neon-lighted marquee. Other improvements included a modern sound system, reworking the interior walls, new lighting system, new cushioned seats, new big screen along with many other changes.

The theatre, under the management of Herman McDowell, formally reopened as the new Princess Theatre on Monday night, July 2, 1934 with a showing of “Sadie McKee” starring Joan Crawford. Also showing with this main feature was the “Pathe News” along with the cartoon, “Willie Whopper”.

After changing ownership a few times, the Princess Theatre continued operation until 1963 when management closed its doors for the last time. It is believed that a combination of factors lead to the steady decline in patronage, which ultimately forced the theatre to close. The first of these was the opening of the South-Port Drive-In near Bridgeport a few years before, which was more popular with teenagers and young adults who comprised the majority of the movie viewer market. The second factor in the closing of the Princess Theatre was television. By 1963, most families in the local area owned at least one television set and with nearby Chattanooga being the home of three television stations, each being affiliated with a different network, a variety of viewing entertainment could be seen by the local population with minimal expense.

In 1976, Mr. Frank Trippe of Fort Payne, Alabama bought the old Princess Theatre and began conducting extensive equipment updating and began extensive repairs for reopening the historic landmark as a family theatre. On Friday evening, October 29, 1976, the old theatre was reopened after thirteen years of sitting idle as the new Valley Cinema. Its first feature film was “Ode To Billie Joe” starring Robby Benson and Glynnis O'Conner. The admission price was one dollar for children under the age of twelve and two dollars for everyone over the age of twelve.

This operation only lasted a few years before closing. The historic building from this point onward received no additional restorations and very little maintenance. It sat vacant until the 1990’s when a church rented the structure for worship services. The use of the old theatre building by the church only lasted a short time, before the church moved from the decaying structure.

By 1999, after sitting vacant for several more years, the two-story building had deteriorated to a point that the roof collapsed and a portion of the north wall was in danger of doing the same. This prompted officials to condemn the building, which would be razed if the local populace and officials did not mount an effort to save the historic theatre building.

Was there any hope of salvation for this local piece of Americana? Could it be saved and a new use found? Would anyone step up to the challenge and prevent a gapping hole from being torn into the downtown business block if the structure was condemned and razed? The answer to all three questions is yes!

That same year, 1999, a group of concerned citizens began a drive to salvage the historic theatre building for a community arts center. The City of South Pittsburg purchased the theatre from its Alabama owners and then appointed a commission of local officials and citizens to develop and execute a plan for the building’s restoration. At the same time they were to formulate plans to acquire the necessary funds to achieve their goal.

Since that time the commission has evolved into an independent non-profit organization known today as the South Pittsburg Historic Preservation Society, Inc. This preservation group, through various fund-raisers, grants and donations, has stabilized the theatre building.

Unfortunately, the damage to the building from several years of unchecked deterioration was so severe that restoration would take several years. The Society has expended thus far in excess of $100,000 in its efforts to restore the Princess Theatre. Included in these expenditures are: securing the site and cleanup of debris from roof collapse, rebuilding of north brick wall, installation of footings, supports, joist and decking for a new roof, acquisition of four hundred theatre seats and two projectors along with the hiring of an architect to develop construction drawings. In 2003 and 2004, a new roof, repairs to the façade and marquee along with the rebuilding of the rear wall have all been completed or were in the process.

Renovation work was completed in 2014, and the building was ready to reopen in August 2014.

Here are a couple of photos from July 2006 of the Princess. Although I wasnâ€™t able to get a view of the interior, the restoration appears to be going quite well. Does anyone know anything about the Opera House located just across the street from the Princess?

This link will take you to two pages of pictures from the 40’s and 50’s. They show the marquee, exterior, box office, projection booth as well as the manager and some staff. Well worth the visit.

Very nice glad they saved it.

The Princess has reopened but there is nothing scheduled at this time.

Like hearing a story with a good ending like this one. So many don’t get this second chance!

The actual address is 215 S. Cedar. Freaked out for a minute and thought it had been demolished! :D