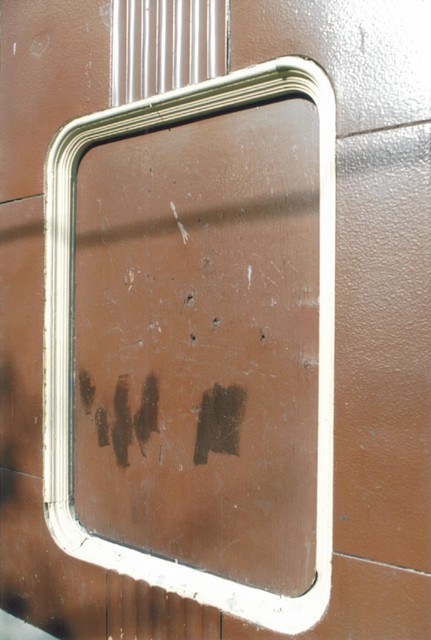 The Harris-Perry Theatre opened on September 2, 1938 with Loretta Young in “Three Blind Mice”. It was built for the Harris Amusement Co. of Pittsburgh.

Located in north Pittsburgh on Perrysville Avenue at the corner of East Street. The classical deco style marquee (shaped like the prow of an ocean liner) and a massive tower feature dominated the corner site. The external surface of the tower was given an enamel iron treatment intended to ‘offset the effects of Pittsburgh’s smoke and soot’. It was closed in April 1959 with Yul Brynner in “The Journey”. It was then used as an annex to an adjacent school. It was demolished in October 2013.

When did this theatre close? I have a book on Pittsburgh’s streetcars of the early 1960s and, in a photo taken circa 1961-1964, the Perry was already closed.

Here is an article I found in the Pittsburgh Press microfilms at Carnegie Library:

Wednesday, April 29, 1959
Perry Theater Closing Its Doors
One of Pittsburghâ€™s best known neighborhood theaters is closing its doors this weekend. The house lights will dim for the last time Sunday night at the Perry Theater on Perrysville Avenue at East Street, and the showing of THE JOURNEY with Yul Brenner and Deborah Kerr will close some 30 years of theater history. James Balmer, general manager for the John P. Harris Corp. which has operated the theater since it was built on the site of the old Drew homestead, confirmed cancellation of the lease today. The buildingâ€™s future is uncertain, M. J. Zahniser, vice president of the Commonewealth Real Estate Co. which is managing the property for the Drew estate said he is entertaining several proposals for use of the building, but nothing definite can be announced now. There have been recurring reports that the building may be converted to use as a supermarket, but this was discounted in view of the lack of adequate off street parking. There is a possibility that the structure might be used as a bowling alley, Mr. Zahniser said. A Harris spokesman said all equipment will be removed excepting the seats and carpeting.

This theater was located right next door to Perry High and eventually the building was used as an annex to the school. When I attended school there in the 1970s, they held shop classes there. Within the past 10-15 years, the original building was torn down and replaced with a more modern structure as annex to the school. I believe they have a gym or swimming pool in the new facility.

This is from Boxoffice magazine, January 1938:

PITTSBURGH-Bids on the present contract for construction of the new theater for the Harris Amusement Company on Perrysville Avenue will be taken at an early date. John Eberson of New York is listed as the architect for the 1,200-seat theater. Building details will be announced soon.

My husband has a book on Pittsburgh Railways in the early 1960s. There are a couple of photos of Pittsburgh streetcars passing this theatre, which was already closed by this time.