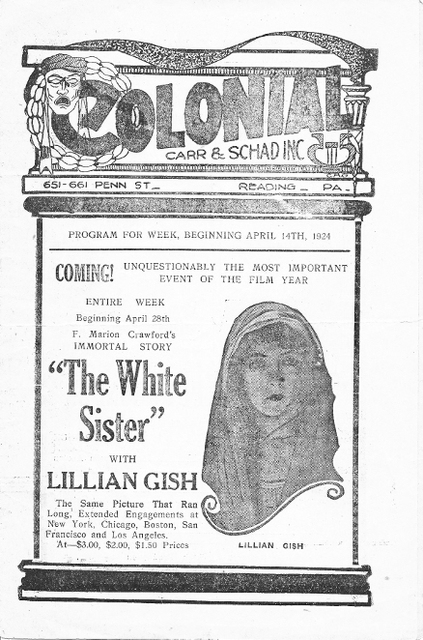 The Colonial Theatre was one of Reading’s first large theatres built specifically for movies, and opened on April 15, 1917, with “Sleeping Fires”. It was operated by Carr & Schad, which had the local franchise for Paramount-Artcraft releases. In September, 1925, the Loew’s Inc. circuit took over and ran the Colonial Theatre through its peak years as home for all the major MGM releases, including “Gone With the Wind”.

In 1963, Loew’s declined to renew its lease when it expired, and Stanley Warner took over for five years. In 1968, some “indies” took over but lasted only one year.

The Colonial Theatre closed in 1969 and was demolished in 1970 to make way for a shopping mall that was never built. A similar fate awaited its rival and near neighbor, the Embassy Theatre.

Nice photo, you can tell that it was an old LOEWS marquee, redone for the new owner.

Grand opening ad can be seen at View link (2 pages)

A 1924 Program from this theater is at the Silent Film Still Archive.