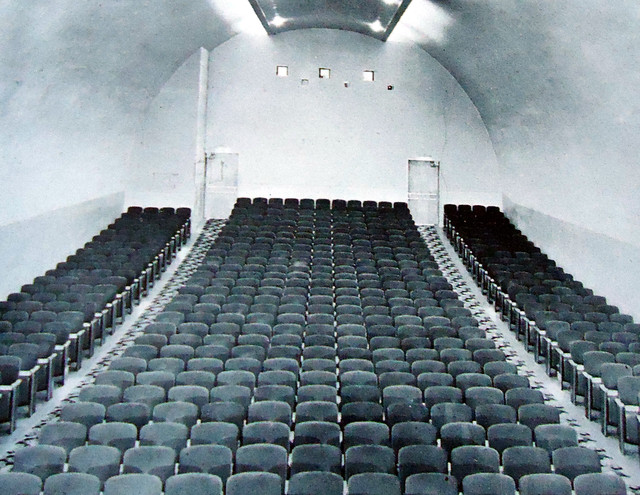 The Arch Theater opened July 8, 1949 with Ray Milland in “It Happens Every Spring”. It was a Quonset Hut syle building designed by architect Fred L. Markham. Located on Main Street, the Arch Theatre was closed February 3, 1973 with John Marley in “Jory”. It became a sewing workshop and is now demolished.

This theatre had an interesting origin. It began as a simple quonset hut, and was opened by the Huish-Gilhool circuit when their Angelus Theatre, a few blocks away, was destroyed by a fire in 1948. While the house was already operating, the building was upgraded and expanded according to the design by architect Fred Markham.

The July 9, 1949, issue of Boxoffice Magazine said that the formal opening of the Arch Theatre had been scheduled for July 8, and a photo of the completed theater was published in the July 30 issue of the same magazine. The quonset hut shape was retained, the front of the building was expanded to one side, and the whole edifice was given a modern “California” (as Boxoffice called it) design, built of redwood and of native rock quarried in Park City.

The Angelus Theatre was reopened in a new building on its old site in 1950, giving Spanish Fork two movie theaters.

Launched July 8. 1949 with “It Happens Every Spring.” Discontinued operation February 3, 1973 after screening “Jory”. The facility was retrofitted for a sewing facility for HuDon Apparel later that year.