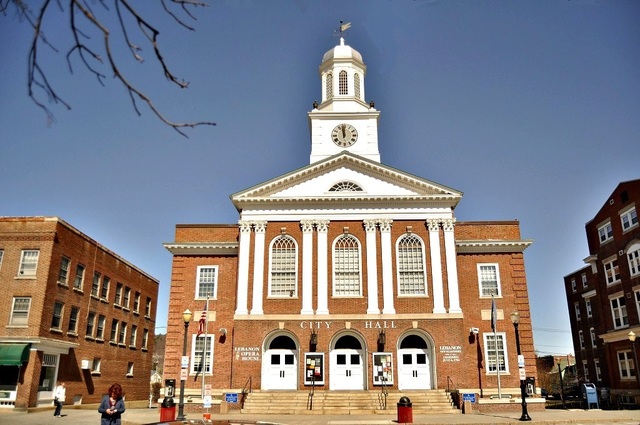 Since opening in 1924, the Opera House has served as a venue for vaudeville, traveling theatricals, movies and community events.

In 1951 the Lebanon Opera House was converted into the town movie theater, and remained so until it was closed down at the end of the 1960s with no plans for its future. It was brought back to life in 1969 by Lebanon High School music director Ralph Bowie brought live theater once again in the Opera House.

After several cycles of activity and dormancy, the City of Lebanon recognized it could neither manage nor care for the facility by itself. The Lebanon Opera House Improvement Corporation was established by the City Council as a non-profit organization in 1991 and helped fund a complete renovation in 2002.

There was an earlier Lebanon Opera House. It’s listed in the 1897-98 edition of the Julius Cahn Theatrical Guide. It had a seating capacity of 1,200 and was located on the second floor. The proscenium opening was 28 feet wide and the stage was 25 feet deep. Owen Briggs was the Manager. Unfortunately, the listings in this Guide do not give street addresses, but it was somewhere in downtown Lebanon. I’m guessing that it burned down and was replaced in 1924 by the current Lebanon Opera House. The 1897 population of Lebanon was 4,500.

The Theatre Historical Society on-line archive has the MGM Theatre Report for the Opera House in Lebanon; it’s Card # 494. Address is “Main St.” which is not correct. There is an external photo dated March 1941 showing the very imposing city hall building. Condition is Good. It says it opened about 1920 and is showing MGM films. There were 800 seats on the main floor and 200 in the balcony. The 1940 population was 7,500.

The History page on their official site has photos.