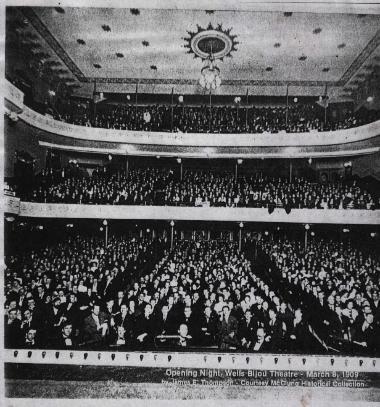 The Bijou Theatre is a charming venue built for vaudeville and later adapted for cinema. It opened on March 8, 1909 as part of the Well’s chain of theatres and contained 1,503 seats. The 1909 auditorium was built behind the Lamar House Hotel (c.1840) using the center of the old hotel as the theatre’s lobby. The theatre was designed by an architect named Oakley.

The Bijou Theatre has two separate balconies: the upper dating from the regrettable era of segregation was accessable only from a side street. At this time, though large, the upper balcony is only used for technical equipment as emergency egress is quite limited.

The lower balcony is attained from stairs at the ends of the standee area. There is no grand stair.

The auditorium features three tiers of boxes on each side of the procenium, with the orchestra boxes still in place. The upper boxes have their own stairways and do not connect with the balconies. The boxes are flanked by large corinthian columns supporting cherubs leaning on broken pediments.

The ceiling is mostly flat with restrained moldings at the walls. The hall has a brick exterior, but the interior is completely wood and plaster. Even the grid in the fly tower is wood.

The natural acoustics are splendid. The Knoxville Chamber Orchestra performs regularly in the intimate hall.

The Bijou Theatre never had a theatre organ. Old photos suggest a pit-organ or photo-player was used to accompany pictures in the silent era.

Motion picture projection equipment no longer exists at the Bijou Theatre, though the projection booth which was wedged in between the two balconies still exists and is used as a follow spot location.

Over the years, the Bijou Theatre lost its small vertical sign and marquee and the tiny boxoffice is long gone. It went over to adult films on April 17, 1965 and was renamed Bijou Art Theatre on September 8, 1966. It operated as an adult theatre until 1975. The theatre was then threatened with demolition. Today the Bijou Theatre is largely intact and is a popular venue for small stage shows, acoustic concerts and small bands.

The Bijou Theatre went through a major renovation began in 2005.

Now Showing Oct 20 1964 at the BIJOU is a double feature.Jim Hutton and Connie Frances in"LOOKIN' FOR LOVE" and Paul Newman in “THE PRIZE”

As schoolboys in the early 1950s a close pal and I often walked across Gay Street Bridge to see movies at the Bijou. Our all-time favorite was Lure of the Wilderness (1952), starring the always beautiful Jeffrey Hunter (we went back for this one a second time). The Bijou regularly held over films after their initial runs at the majestic Tennessee just up the street. Admissions here were cheaper, and for watching movies we appreciated the Bijou’s comfortable elegance over the Tennessee’s oppressive grandeur. I’ll always remember the sight of that forlorn dark brown stairway climbing up the exterior of the north side to a second balcony reserved for blacks. It was, though, probably the only place in the city where blacks could gain access to Hollywood studio product.

It bears mentioning that during the late 90s / early 2000s there was a resident theatre company operating out of the Bijou, which performed such shows as Little Shop of Horrors, Evita, Ain’t Misbehavin', etc. It was a thrill to perform on this historic stage which has seen luminaries such as the Marx Brothers, Lily Pons, JP Sousa, Will Rodgers and more!

Will Rogers,Seeingl I am told I am a very very distant relative.

Circa 1950 photo added courtesy of the Tennessee Archive of Moving Image and Sound Facebook page. Lyric Theatre marquee behind the bus.

This PDF is a masters thesis, dated 1976, by Robert A. Ellis of the University of Tennessee, Knoxville. It is titled “The Bijou Theatre: 1909-1949” and has quite a bit of detail about the Bijou and its history.

Ellis gives the name of the Bijou’s architect only as Oakly of Montgomery Alabama. The only other reference to this architect I can find on the Internet is an item from the July 4, 1909 issue of The American Architect which again refers to him only as “Architect Oakley, Montgomery.” Perhaps he went by only the one name professionally, like Liberace.

Interestingly enough, the 1909 item said that Oakley had prepared plans for the renovation of the Noble Street Theatre in Anniston, Alabama, as a ground-floor house.