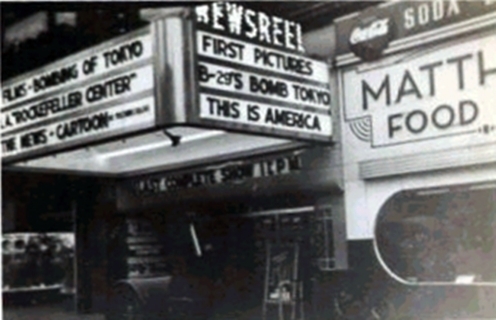 The Newsreel Theatre was opened in 1938, and was designed by architect John Eberson. It provided one hour of news from one of the five newsreel companies: Fox Movietone News, News of the Day, Paramount, RKO-Pathe and Universal. Located in the ground floor of the City Investment Building. Closed in the late-1960’s as television news replaced the need for newsreel theatres. It was converted into retail use, but has since been demolished.

Was this still showing only newsreels when it closed?

I believe this one is mentioned in the latest Philip Roth novel “The Plot Against America.”

In the late sixties a new facade was put on the building, and the theater’s name was changed to the Guild. The Guild operated for several years with old battle films, westerns, horror movies and the like, often repeating bookings of given pictures as little as a few weeks apart. By the mid seventies the prints of most of these pix were wearing out and not being reserviced, and the Guild began running out of product to play. A middling renovation of the theater and policy switch to first run films failed to find local support, and the Guild closed in 1976. The space now serves as a clothing store.

I just read Philip Roth’s “The Plot Against America”. A whole chapter takes place in this theatre, and its (fictional) manager is a fairly important secondary character.

I was just in Newark yesterday to photographs cinemas. The building at 800 Broad St. looks much newer, not like a repurposed theatre. I think this one may have been demolished with a new structure built in its place.

This shows that the theater was once known as the Embassy Newsreel:
View link