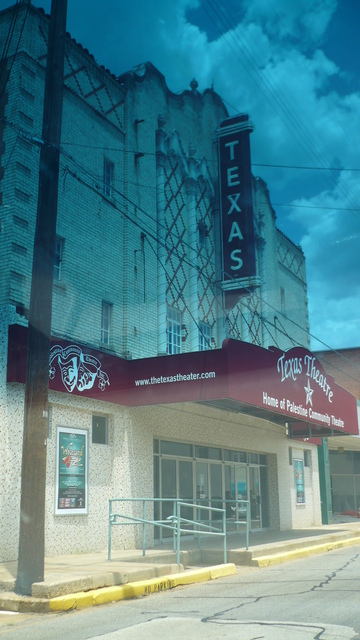 The Texas Theatre opened in 1921 on Crawford Street, primarily as a vaudeville house. It was designed in a Spanish Colonial style. In 1930 it was remodeled in an Atmospheric / Italian Renaissance style by architect W. Scott Dunne. From the 1940’s into the 1960’s, the Texas Theatre served as a movie house. In the 1980’s, the theatre reopened as a live theatre, but closed in 1997.

After many years' restoration work (which is still to be completed, including its auditorium’s ceiling, the marquee and carpeting), the Texas Theatre is now reopened, presenting live entertainment from the Palestine Community Theater which operates the theatre. The theatre’s “Texas” vertical sign has been restored and relit.

Although the intro above says that the Texas opened in 1921, the April 15, 1930, issue of Motion Picture Times published an architect’s rendering of the theater, with a caption reading:

“This theatre, with a seating capacity of 1800, is to be built at Palestine for the R. and R. motion picture theatre interests. Designed by W. Scott Dunne, Dallas architect, the building will be one of the most modern with a balcony, lounge, rest, and smoking rooms on the mezzanine. The auditorium will be treated in an atmospheric motif in Italian style, with a forty-foot proscenium arch, flanked by tower motifs.”

This web page contains an essay about the Texas by Bob Bowman who says that the Texas opened in 1928, burned in 1929, was rebuilt in the late 1930s, burned again in 1939 and again reopened.

To add to the temporal confusion, the League of Historic American Theatres says the Texas was built in 1922. I suspect that if I searched the Internets I could find still other opening dates for the Texas. Somebody will probably have to search the archives of the local newspaper(s) in Palestine to get the actual history of this theater.

After comparing photos I guess the Vitrolite looking facade was removed to the present day look.

I would love to see a photo of this theatre with its Vitrolite exterior!

Close enough Lost! LOL! Thanks for always caring and being there when needed! And be sure to check out the Vitrolite facade on the Rialto in Cedarsburg WS with its amazing amount of black tile from top to bottom!

Here is another view of the Texas:
http://tinyurl.com/yjzdo94

The atmospheric version of this theatre opened in 1930.

Is the atmospheric feature still intact?

Dana Goolsby, local historian, writes that the Texas was built on the site of the Best Theatre. The Best opened in 1917 as a vaudeville house, converting to sound in 1923.

Is the atmospheric feature still intact?

No. After two fires and a collapsed roof (in the late 90s), nothing remains of the original ceiling.