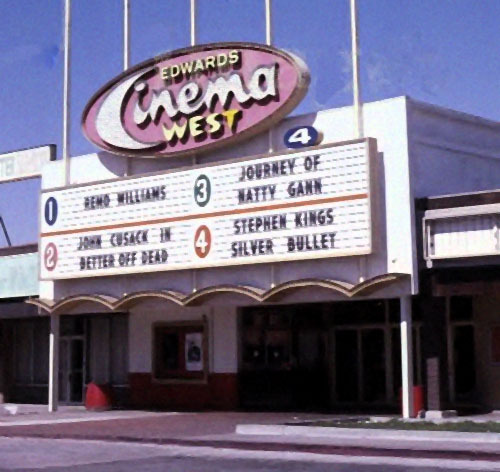 Edwards third Orange County location opened on August 5, 1966 with a major studio preview and its regular attraction, “Thunderball”. Edwards built no other theatres until 1968 when they opened their flagship, the Newport Cinema, which has outlasted all of the original Edwards Cinemas.

On July 10, 1970 it was twinned. Later another screen was added to the Cinema West, but the venue and its surrounding shopping center later began to show its age and commenced its last night of operation on February 26, 1991 to make way for its and the center’s demolition. By this time Edwards had grown to 29 Orange County locations, not including those in Los Angeles, Riverside and San Bernardino Counties.

I remember going to this theater at least twice in 1981. The first time was when “Star Wars” had its 1981 re-release in the Spring, which was for one week only. Because it was for one-week only, and because home video was still in its infancy and Star Wars hadn’t gotten to home video yet), my sister and I went here on the first Saturday and stayed for FOUR consecutive showings of the film, their entire run for the day, starting at 1 pm and ending sometime around 10 or 11 at night. Funny thing, for some strange reason the theater inserted an intermission break at the hour point. Every single showing, audience members blinked in disbelief and a few hesitantly took a break in the lobby. We just got up and stretched a few times, then sat back down. It was only like a 5 or 10 minute break. But for a 2 hour movie?

Anyway, the second memory I have of the Edwards Cinema West is seeing “Raiders of the Lost Ark” with a full house on opening weekend (might have been pening night, I’m not certain). What. A. Blast. The audience reactions were just great; laughter, oohs, aahs, screams, shouts, cheers, etc.

I’m not sure if I ever saw any movies before or after 1981 at the Cinema West, but I remember it as a pretty decent theater and I remember being upset upon learning in 1995 that it had been torn down and replaced with a new multiplex.

Wow!
Finally got a photo of this theater.
I was born and raised in Westminster Calif and this was one of 2 theaters in my town I saw movies at growing up (the UA Twin being the other)
Just thought I’d say that I am not sure when the Photo was taken but that I did catch Remo Williams at the Cinema West in 85.
I remember one huge screen that was like 3 or maybe 4 stories high, another screen in the next room that was also huge but slightly (cont)

smaller and the other 2 screens on the opposite side of the theater were the size of the average screens in theaters today.

Here is a list of some of the movies I seen at the Edwards Cinema West.

Star Wars, The Empire Strikes Back, Raiders Of The Lost Ark, Indiana Jones And The Temple Of Doom, Scarface, The Terminator, The Abyss, A View To A Kill, Red Dawn, Star Trek III, Gremlins, The Goonies, Life Force, Casualties Of War, Fast Times At (cont) RidgemonHiHight

Sorry bout the last title :)
Here is more and then I’ll close.

Fast Times At Ridgemont High, Porky’s, The Toy, Poltergeist, Rocky III, Rocky IV, Superman The Movie, The Exorcist (1979 run), Kramer vs Kramer, The Last Star Fighter, Conan The Barbarian, DC Cab, The Philadelphia Experiment, The Woman In Red, Halloween III, Friday the 13th VI, Nightmare on Elm Street II and V, and many more I can’t remember.
Anyway thanks for the memories.(cont)

If anyone has anymore pictures of the Edwards Cinema West of any old pictures of any area of Westminster Ca then contact me at and hook me up.
Again, thanks for the memories.

This was my favorite childhood theatre in the 70’s/early 80’s. I went there as much as my parents would take me. I loved how big the screens were (especially that first screen) and I have many fond memories of going there. The one memory that stands out the most is when I went to see ICE CASTLES with my sister & my cousin and after the film my sister and I switched screens to watch THE WIZ and my cousin refused to follow us because she wanted to watch ICE CASTLES a second time. I’m still heartbroken that this theatre was demolished. I’d give just about anything to watch a movie there right now.