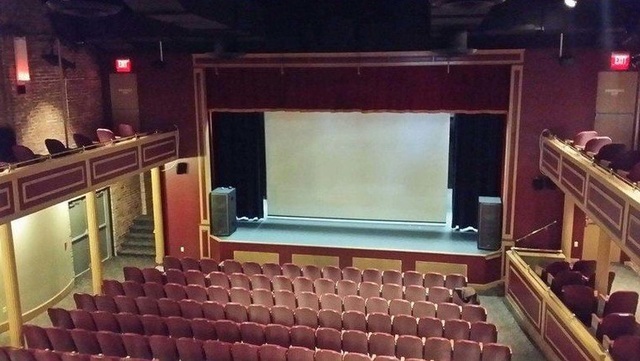 The Princess Theatre, located on Rushville’s Main Street, opened in 1915 in a building owned by the Masons (the organization still owns the building today). Originally, the Princess Theatre was exclusively for live performances, including plays and later vaudeville, but in 1936, the theatre became a movie house. By 1950, the Princess Theatre was operated by Affiliated Theaters Inc, of Indianapolis, IN. It remained in operation into the late-1980’s but then sat vacant for several decades.

A group founded in 2002, Princess Theatre, Inc., with the intention of restoring the theatre to its 1930’s appearance, hopes to use the Princess Theatre to show movies and for community gatherings. It is expected to cost nearly $200,000 to restore the theatre. Following restoration, it was reopened on December 1, 2018 screening first run movies.

The contents of the building, including the theater’s old seats and other equipment, were auctioned off by the Masons on September 21. The lodge sold the building to the City of Rushville in August. The city plans to put a new roof on the building and perform other maintenance immediately, but the long term plan includes the restoration of the theater as a multi-use venue. Grants are bing sought for the project, according to this article in the the August 25, 2014, issue of the Rushville Republican.

Because the Masonic Ldoge building looks like it was built all at once, and it was quite new in 1920, this item from the January 17, 1920, issue of Exhibitors Herald has be wondering if the Princess Theatre started out in a different location and later moved into the Masonic building:

“RUSHVILLE, IND.— Walter F. Easley, manager and owner of the Princess theatre, has purchased the adjoining building which has been occupied by a bowling alley and will enlarge and reconstruct the Princess to take in the ground thus acquired. Work will be begun January 19, plans necessitating the closing of the house for six weeks or two months while reconstruction is in progress.”If the Princess was elsewhere in 1920, the theater in the Masonic building might have operated under a different name in its early years. Theater names I’ve found that were used in Rushville, Indiana, over the years are the Gem, the Vaudette, the Portola, the Mystic, and the Castle.

After several starts and stops, renovation and restoration of The Princess Theatre Building is underway. This Article from the Rushville Republican provides some of the details. http://www.rushvillerepublican.com/news/renovations-on-princess-theatre-ongoing/article_82063e77-ecfa-5ae2-b494-e38e7aabe53b.html

A quick history of The Princess Theatre in Rushville, IN. The Princess was opened as part of the Masonic Hall complex in 1915. The northern third of the building was a bowling alley, the middle third was the theatre and the southern third was a post office. The Masonic Lodge occupied the upstaris space as it had until the fall of 2014.

In 1918, the theatre was closed to expand into the space occupied by the bowling alley. The Princess Theatre closed in the 1990’s.

The plan for renovation is that the former masonic temple upstairs will become the new Rushville City Hall and Council Chambers. The former post office and later retail store on the south side of the building will be a higher education facility (tennant to be named soon) and the Theatre will be restored. One other correction is that sound was installed in 1929 and the first talkie was “The Rainbow Man” shown on July 14.

Here’s an announcement about the Masonic Lodge building in Rushville, from the “Contracts Awarded” section of the May 23, 1914, issue of The American Contractor:

The architect “Herbert Faltz” was probably Herbert William Foltz, who practiced in Indianapolis from 1898 to 1933.

A Rushville city councilman is putting his dance moves to the test, hoping a viral video will help him raise funds for the restoration of downtown Rushville’s Princess Theater.

Councilman Brian Sheehan recorded a video of himself busting moves and it quickly went viral with more than one million views. So, he decided to use the video to help a cause close to his heart.

Watch the video here if it doesn’t display above.

“Brian is a wonderfully pleasant guy that works tirelessly donating his time and talents to improve his community,” said Shane Dunigan, one of Sheehan’s friends.

A city advisory board, which Sheehan is a part of, has been exploring options for the restoration of Rushville’s Princess Theater. They hope to restore it to its former glory and have asked the mayor to send out requests for architects to develop proposals for reuse of the space.

Sheehan is asking anyone who watches his video and who enjoys it to visit his GoFundMe page and donate money to the Heart of Rushville, which oversees fund disbursements for the project.

The Princess is now open for business on a limited basis. It has shown two movies and his preparing to show its third, Gone with the Wind on 26 Sept. The interior of the theatre has been demolished and the City is working to begin restoration of the interior and exterior. Follow the progress for the theatre on Facebook at princess theatre restoration

More good news for The Princess Theatre. A partnership has been reached with Wolf Theaters, a regional movie chain of Greensburg, Indiana to show first run movies along with classic films and live performances.

Restoration of The Princess Theatre will begin this fall with complete restoration to be completed by the end of 2017.

The Princess is in the middle of a $3 million dollar renovation. The top floor is being converted to a new City Hall, the former commercial area will be a branch of a community college and The Princess will be showing first run movies, classic movies, concerts and live performances begining later this year. If I can figure out how to post photos, I will.