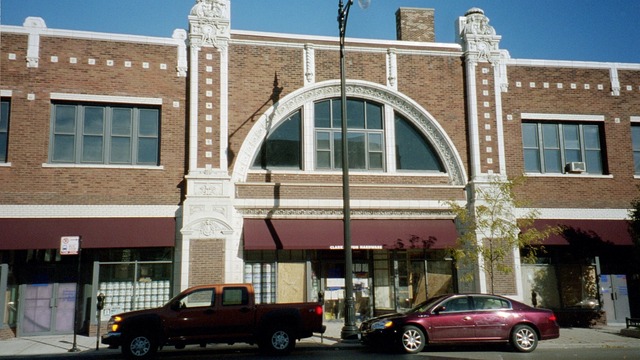 This Edgewater neighorhood theatre, while under management of the Lubliner & Trinz theatre chain, was originally known as the Ellantee Theatre and opened in 1919 with 1,480-seats. The theatre was later renamed the Ridge Theatre. Long ago closed as a movie house, today the building houses a hardware store.

They seem to be putting some money into the building – the facade is being worked on by a restoration contractor, with scaffolding up (although I think a part of it was removed). The stage floor, actually a rather deep stage, is still in the store, although the auditorium floor is leveled. I thought I saw a peek of plasterwork where a ceiling tile was missing. I didn’t see any posters on the walls.

In “NEIGHBORHOODS WITHIN NEIGHBORHOODS-20th CENTURY LIFE ON CHICAGO’S FAR NORTH SIDE” by Neal Samors, there is a nice marquee shot of the Ridge theatre- circa 1940- on page 40. The Ridge specialized in westerns and war movies. Also in the book: at least 3 pictures of the Granada (from 1930, 1950, and 1964),the Norshore(3 great pics of the marquee, lobby, and auditorium),the Cine, and the Howard theatre.

OPENS TODAY, AT 6 PM. LUBLINER AND TRINZ' NEW THEATRE ELLANTEE, DEVON AVENUE AT CLARK STREET, with Dorothy Gish in “Boots” interwoven with a specialty orchestra and corresponding novelties; a program of high standards

We hung out Saturday nights in the late `70’s at a place called Fiddler’s Green across the street from the former Ridge Theatre.
There was also a rather small bar next door to the Ridge in 1984-85. Though I don’t recall the name. I think it had then recently converted in to the hardware store. Devon had many bars between Ashland & Broadway back then.
Cuneen’s, COD’s, etc. Dewey’s across from the hardware store parking lot, on the Clark St. side was the better of the late night food emporiums. Dewey’s classic name in the brickwork was covered by an awning a while back.

We had a nice tour of the building by a man from the hardware store two months ago.
The original ceiling is still there behind the added ceiling but is pretty plain.
Here is a picture of one of the door frames that once connected the lobby to the auditorium :
View link

2012 DNAInfo article about a then exhibit of the theatre portion by Clark-Devon Hardware.