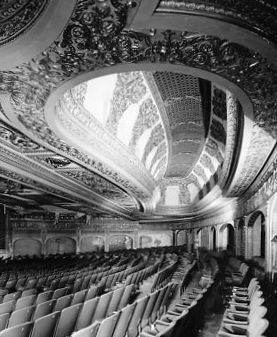 Built in 1926 for the Marks Brothers circuit, this was one of the largest movie palaces on Chicago’s Far North Side, located in Rogers Park. The Granada Theatre was opened September 18, 1926 with a Jack Haskell stage show “Eastern Nights” and on the screen Belle Bennett in “The Lilly”. The Wurlitzer 4 manual 20 rank theatre organ was opened by organist Alfred F. Brown The proscenium was 60ft wide and the stage 32ft deep. Seating was provided for 3,448, with 1,833 in the orchestra level and 1,615 seats in the balcony. On November 18, 1932, the theatre was acquired by the Publix/Balaban & Katz chain and it was briefly closed, reopening on July 29, 1933 with John Barrymore in “Reunion In Vienna” & Laurel & Hardy in “Me and My Pal”. The Granada Theatre was originally designed by Edward Eichenbaum (of the firm of Levy & Klein) for both live stage shows and movies, but by the 1940’s, was only showing films. On November 19, 1975 the World Premiere of Jack Nicholson in “One Flew Over the Cuckoo’s Nest” was held at the Granada Theatre, with Jack Nicholson & Louise Fletcher appearing ‘in person’. It remained open as a movie theatre, operated by Plitt Theatres until the late-1970’s.

The Granada Theatre was used for rock concerts sporadically during the early to mid-1980’s, but eventually closed entirely.

It was torn down in 1990, after being stripped of all its remaining decoration. An apartment/retail complex (named for the Granada) was constructed in its place.

Angel from the Granada, part of the upcoming Architectural Artifacts auction. Links for both.

Just read that some of the Granada facade ornamentation now adorns the entrance to the Sanfilippo Foundation estate in Barrington Illinois. Seen in the cover photo of their website below.

Lou Wolf was still alive? If there’s any justice Satan will make him live in one of his own properties for eternity.

Lou Wolf was a good friend of the owner of a West Side business I worked at in the 1960s. Whenever he would come around, everybody would literally hide, he was so creepy.

A GESTURE TO THROW NEW LIGHT ON THE GRANADA (Paul Gapp, Architecture critic, Chicago Tribune, 1987) When this city saved the Chicago Theatre, it earned no right to turn its back on the three other major movie palaces of the 1920s surviving here. Those are the Uptown, the Avalon and the Granada—and among them, the Granada is perhaps the grandest of all. You have probably seen the elaborately ornamented and arched terra cotta facade of the now-threatened Granada, which stands on a prominent site at 6433 N. Sheridan Rd. But if youve never been inside the theater (which has been dark for several years except for a few rock concerts), you may wish to visit one of two photo exhibitions that will continue through July 31. One is on the fourth floor at the south end of the Chicago Public Library Cultural Center, 78 E. Washington St.; the other at the Rogers Park Branch Library, 6907 N. Clark St. The recently shot black and white photos of the Granada by Mike Williams are part of a suddenly escalating, last-ditch public effort to find a new use for the theater to prevent its demolition by developers who have talked about building an apartment tower in its place. Architect Daniel D. Watts curated the photo exhibits. He also organized the Save the Granada Theater Committee, which is working in league with the Rogers Park Community Council and the Theater Historical Society. Williams photographs show the exterior of the Granada, some of the more sweeping expanses of its interior and a number of its decorative details. The pictures also convey impressions of desolation and incipient decay in the 3,447-seat house, which opened in 1926. The Granada is nominally Spanish baroque in style, although it manifests many of the other eclectic, whimsical and deliberately overblown twists and turns of form and ornamentation found in big urban stage-and-screen venues of the time. Its grand staircase, crystal chandeliers, stained glass, use of marble and bronze, coffered ceilings and acres of ornamented plaster give it a marvelously gaudy quality. Cleveland-born Edward E. Eichenbaum designed the Granada while working for the architectural firm of Levy & Klein in Chicago. He had begun his career in Detroit with the distinguished Albert Kahn and at another point was associated with the Chicago-based design firm of A. Epstein & Sons. Other Chicago theaters credited to Eichenbaum include the Regal and Diversey. He also designed the Palace in South Bend, Ind., and the Regent in Grand Rapids, Mich. Eichenbaums love of legitimate theater originated during his student days at the University of Pennsylvania, and he even understudied the great George Arliss in ''Disraeli'' for a year when the play was running in Philadelphia. Eichenbaum once called the Granada ''the greatest design I have ever been privileged to make,'' according to a 1983 article by Sharon Lindy published in Marquee magazine. Film palaces were being built so rapidly in the 1920s that Eichenbaum sometimes used the same terra cotta molds on different theaters, ingeniously assembling them into fresh configurations to save time and money. When the Granada was still on the drafting boards, Eichenbaum told an interviewer: ''I want this building to be paradise, so that the common man can leave his meager existence at the door and for a few hours feel that he, too, is among the very rich class that he reads about in the paper.'' Fifty years after he designed it, Eichenbaum returned to the Granada for a visit to receive a 1976 Marquee magazine award from Joseph DuciBella of the Theater Historical Society. Eichenbaum detested the plainness of modern theaters. ''Theyre nothing but barns,‘’ he said. Eichenbaum died in 1982. The present effort to save the Granada is supported by DuciBella, a theater historian, and by preservationists. Early this month, a representative of the Illinois Historic Preservation Agency said the Granada was a ‘'very good candidate’‘ for listing on the National Register of Historic Places. Architect Watts, spearheading the Granada campaign, points out that most of the theater is unaltered and in good condition: Its original marble floor is sound, its organ intact, and even its original stage lighting is in working order. The Granada does not have Chicago municipal landmark status as does the Chicago Theatre on downtown State Street, now a busy venue for live entertainment. Yet it doesnt necessarily make sense to compare the strategy or business rationale for saving the Granada with the scenario that led to the Chicagos salvation after a slide to the brink of demolition. The location, economics and re-use factors are disparate, after all. Still, neither can such differences be used as alibis for shrugging off the Granada. The old North Side movie palace is part of the citys sociocultural fabric and its brilliant architectural heritage. There is no doubt, then, about the Granadas credentials. And so we are left with the basic question about any major preservation effort: How many people care, and how hard are they willing to work?

The Library of Congress link with the gallery of pre-demolition photos.

Previously posted in a comment, but this link is enlargeable for greater detail.