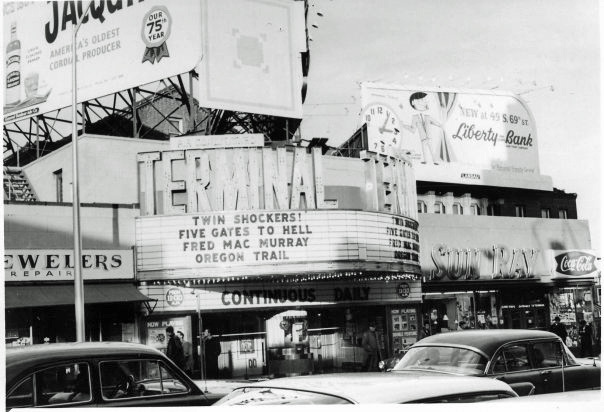 It was housed right next to one of the entrances (not the main entrance) of the 69th Street Terminal building. The New Terminal Theatre was opened October 14, 1936 with “The Big Noise” starring Guy Kibbee. It was operated by Stanley-Warner until the mid-1960’s when it was taken over by the Sameric Corporation.

I recall seeing all my favorite “B” horror movies there on a Saturday afternoon.

ok maybe someone can help me, there was a movie theatre called the park theater in upper darby located where the PARK SELF STORAGE is now at 8000 westchester pike on the right hand side if you go a little further, picas is on your left.

Don’t know if bobc316 is still looking, but I grew up around the corner from there. I remember my mother telling me that there used to be a movie theater there and I the front looking very theater like. All while waiting for either the “W” bus or the trolley, whichever came first on the corner of South Pennock and WC Pike. Know Pica’s well, worked there for many years.

One of the few theaters that, as a kid, I didn’t want to enter. Always seemed to be full of drunks (there were enough bars around).

finkysteet, Rite aid never occipied the Goldman’s/Stanley Warner’s/Eric Terminal Theatre site. The site became a walkway to both the Media and Sharon Hill Trolleys (SEPTA Routes 101 and 102), and a secondary entrance into 69th Street Terminal. This was all done during the 1987 reconstruction of the 69th Street Terminal complex that added a third entrance at the back of the Norristown Hi Speed Line

This photo of the Terminal Theatre from the Library of Congress features the 1937 movie Dangerous Number on the marquee. It’s not the same marquee that appears in later photos.

As near as I can figure, the Terminal Theatre was part of an annex added to the original 1907 terminal building in 1936 and designed by architectural firm Simon & Simon. An item in the March 31, 1937, issue of The Daily Sun from Hanover, Pennsylvania, makes reference to “…William Goldman Theatres, Inc., Philadelphia, an independent theater organization, operating many theaters in the Philadelphia area, including the recently opened Terminal theater, Upper Darby….”

This page at Philadelphia Architects and Buildings cites a January 15, 1936, Philadelphia Real Estate Record and Builders' Guide item referencing the project as “Phila. & Suburban Terminal Corporation / New Terminal Building and Theatres.” The plural “theatres” was probably a typo. I think there was only ever one in the building.

Edward Paul Simon would have been the lead architect on the project, as his brother, Grant Miles Simon, had withdrawn from the firm in 1927, though the firm name Simon & Simon was still in use as late as 1936.

The overview information needs to be updated. Through most of the 60’s the theater was operated by Stanley Warner. It was the late 60’s to early 70’s it was run by the SamEric corporation. The Tower was a William Goldman theater until 1967 when it was sold to Ellis Theaters. The majority of the managers and staff went to work at William Goldman new center city theater the Regency.