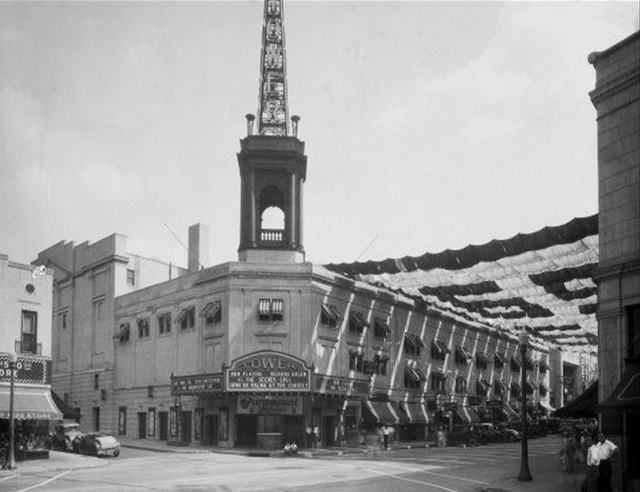 Opened on October 1, 1928 as a movie and vaudeville showplace. The opening movie was “Glorious Betsy” starring Dolores Costello. There was a stage show headed by Earl Lindsay’s Broadway Revue and William Andrews was the opening organist on the theatre organ. By 1950 it was operated by Paramount Pictures Theater Corp. It was later operated by William Goldman and in 1967 was taken over by Ellis Theatres.

The Tower Theatre was reborn in the 1970’s as a premier venue for concerts. The sturdy copper base which held the iconic metal rooftop tower was removed in 2009 and was replaced by a skeletal metal feature to support the tower. However, the rooftop tower was removed on August 13, 2019 due to structural safety issues. The ‘TOWER’ name letters and ball on top were donated to a local museum. It is uncertain if the sign will be recreated.

I lived in Philadelphia from 1987 to 1996 and got to see some fine live performances at some great venues (The Keswick, TLA, The Tower). I only attended one show at The Tower and I wish I had gone more often. What a great theater. I saw Frank Zappa play there on Valentines Day 1988 and it sounded incredible.

saw many shows and some movies at the Tower starting in the 70’s. Went back last year for two shows (now live 2 hours away). Hope to add more remember many great nights there. Love the “Tower Theater Midnight Sun Memories” group. Mott, Bruce Bowie

Photo via 11/20/14 link below, though the photo date is from Wikipedia. Copy & Paste to view article.

My dad managed the Tower in the mid 1950’s, and at the time it was owned by Paramount, so they got all the first run Paramont pictures right away. I was only born in 1954 so I missed all the fun, but he told me stories about the theater . I remember him telling about staying up half the night with the staff, setting up the special VISTAVISION screen for the next feature. It also killed me when he told me about all the movie posters and lobby cards they just threw out in the trash after feature was over – as a former collector of movie memorabilia, I would die for some of those!

My grandfather operated Schneider’s Candies next door to the Tower at 23 S. 69th Street during the 1930’s and early 40’s. I found one pic of a parade with the Tower advertising “The Charge of the Light Brigade.” You can see my grandfather’s store sign to the right. Does anyone have any other pics of this vantage point? Thanks, Dave Eklund Thorndale, PA

Please update the information in the intro. It was run by William Goldman Theaters then in 1967 it was taken over by Ellis Theaters. The longtime manager went to work at The Regency in center city. Ellis Theaters briefly closed the theater and put in new curtains and a new screen.

I hope dteklund can scan & share here that photo!

In looking into my family tree I came across an obituary for my Great Grandfather Fred H. Erichson, Sr. (1888-1964) and found he was an employee of The Tower for 26 years and thought that was really cool. I currently work for the country’s largest Christian theater Sight and Sound in Lancaster PA. Guess the apple didn’t fall far from the tree. I saw Sojourner1954 posted that his father was the manager back in the 50’s. He probably could have been my great grandfathers boss.

Link with a 1980 stage shot of The Blues Brothers.