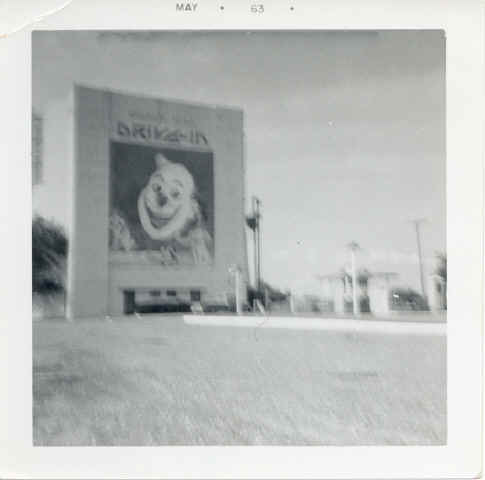 The Chalk Hill Drive-In opened on July 4, 1941 with Virginia Bruce in “The Invisible Woman”. This drive-in had a capacity for 408 cars on 12.5 acres. There were 204 in-ground speakers. It was operated by W.G. Underwood and Claude Ezell Associates Inc.

Grand opening ad uploaded in the photo section for this cinema.

The Chalk Hill Drive-In opened on July 4, 1941 just two weeks after the Northwest Drive-In had its Grand Opening. Opening feature was “The Invisible Woman”. This drive-in had a capacity for 408 cars on 12.5 acres. There were 204 in-ground speakers and a playground for kids was added. It was operated by W.G. Underwood and Claude Ezell who operated the both the Northwest Drive-In and another in San Antonio.

The Chalk Hill started doing live stage shows prior to the movies in 1943 to five a full evening’s performance. The original design of the Chalk Hill was identical to that of the Northwest with a single star along with the drive-in’s name. The theater modernized the look of the tower with a clown’s face and neon lighting. Additionally, in 1954, the Chalk Hill replaced its screen with an 80-foot curved screen for CinemaScope films. Its first two in June were “King of the Khyber Rifles” followed by “The Robe.”

The Chalk Hill Drive-In became part of the Texas Southwest Drive-In Theatres circuit with the Buckner and Denton Rd. in 1972 and 1973. It closed for the season in 1973 and while there are many recollections of the theater’s continuance, no advertisements, bookings or re-opening announcements are listed. Steve Fitch’s two iconic photographs of the Chalk Hill from 1973 — one showing the panoramic screen and playground and the other showing the clown screen tower at dusk — would also be the ultimate end points to the theater if that were confirmed.

Great yet sad footage of the Chalk Hill Drive In Theatre being demolished, 1974. From Channel 8 – WFAA.. https://www.youtube.com/watch?v=RvIm01Qt03o