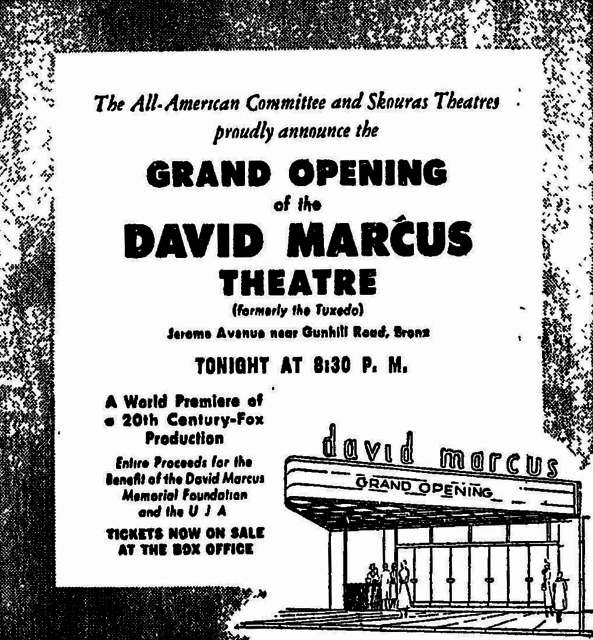 The Tuxedo Theatre was built in 1927. It was re-named David Marcus Theatre on December 14, 1950. This theatre closed around 1972. The building still stands and an address search shows a US Post Office located in the lobby and a furniture store in the auditorium.

This was a Skouras house and then UA as the David Marcus. Who knows who it was named after?

I think, but am not sure, that David Marcus was an Israeli miliary officer in the late 1940s. I did not Google the name…so this is only a guess.

A biopic was made about David ‘Mickey’ Marcus in the early 60s. It was called “Cast a Giant Shadow” and it starred Kirk Douglas.

In the 1970’s it also was an OTB parlor. I was there in 2007 and it’s now a furniture store, with a gigantic red canopy on the top of the exterior wall on Jerome Avenue.

Looks like the function should be changed to retail.

In his book MY HAPPY DAYS IN HOLLYWOOD, television director Garry Marshall (Happy Days, Laverne & Shirley) talks about working in the Tuxedo as a boy. He vividly recalls working there during a showing of Ingrid Berman’s GASLIGHT as well as attending it on Saturdays to watch Flash Gordon serials.

In Street View, it looks like the branch Post Office at this address occupies the former lobby of the theater. The furniture store that occupies some of the storefronts along the side of the auditorium advertises a 20,000 square foot showroom. That has to include the auditorium itself.

There is also a women’s clothing store in two of the storefronts, but it probably doesn’t extend into the auditorium. I don’t know why the Internet says the furniture store is at 3448 Jerome. In Street View that’s just a small building with an H & R Block office in it. Maybe the furniture store added that space to its operation since August, 2011, when Google’s camera car went by.