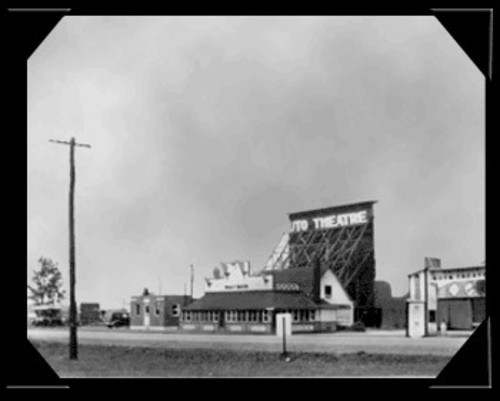 The Lynn Open Air Theatre opened in 1937. It was renamed Boyer’s Auto Theatre from May 26, 1939 when it reopened with Joel McCrea in “Youth Takes a Fling”. This single screen drive-in was renamed Lynn Auto Theatre on May 19, 1951. In 1967 a second screen was added. This drive-in is the oldest operating drive-in theatre in Ohio.

“Come as you are in the family car” was also the slogan for Pacific Drive-ins in Southern California in the fifties and sixties. With the advent of adult films at drive-ins in the late sixties and seventies, the phrase took on a new interpretation.

All compliments are accepted, left-handed or otherwise.

Here is a nice slide show of the history

From Rich Reding at the Lynnn Drive-In Movies: Yes the Lynn has converted to digital Projection. Both screen One and Two have Barco projectors with GDC servers. We converted last year 2013. Thank you

Chris1982 thank you so much for keeping us updated on the drive ins. They are a dying breed that need to make a big comeback.

Mike, I agree, the drive-ins are a dying breed, and with the conversion to digital, more just can’t afford the transition. You hate to see them go but it is the same with the small town theatres and the neighborhood houses everything is all but gone.

Based on the helpful but old slide show linked by Drive-In 54:

From the Lynn’s History page:

The construction of the Theatre started in the summer of 1935. In the spring of 1937 the Theatre opened as BOYER’S AUTO THEATRE. The Theatre was built by Andy Thompson and Roland Boyer. A Restaurant, Gas Station, Golf Driving Range and Arcade were also located on the Theatre grounds prior to the Theatre’s opening. The complex was owned and operated by Roland Boyer during the 1930’s and 1940’s.

In the spring of 1948, Ward Franklin and his son-in-law Ray McCombs purchased the Theatre. Changing the name, in honor of McCombs daughter, Judy LYNN, to the Lynn Auto Theatre. In the mid 50’s, the Restaurant, Gas Station, Arcade, and Golf Range were closed.

In the fall of 1957 Richard R. Reding and his son Richard W.“Dick” and his wife Eunice “Abby” purchased the Theatre. In 1970 Rick joined his Mom and Dad in the family owned business. During the 70’s and 80’s Dick, Abby and Rick owned and operated twelve Theatre’s in NE Ohio. The Drive-In Theatre’s are now operated each season by Rick’s two sons Rich and Jamie, making it a four generation business!

In 1967 a second screen was added along with the traditional Speaker Post Sound System to make the Theatre a Twin Drive-In. Most resent in 1996, new Stereo Audio Soundheads, two Digital Dolby FM Stereo Transmitters and Audio Boards were installed in both Theatres allowing patrons to enjoy First Run Movies, in HD Stereo, from their vehicles radio. In 2001 both Theatre’s Projection Systems were overhauled and refurbished. For the 2002 season both screen towers were painted and new counters were installed in the Concession Stand and in 2005 a “Classic Mammoth Retro Neon Marquee” was installed!

Kerry Segrave’s indispensable book Drive-In Theaters includes a list of the drive-ins with the earliest start dates he could find (through 1939), while cautioning that it doesn’t prove that number 7 on his list was the 7th drive-in to open. It did not include Boyer’s although it did include a Lynn from 1937 – the Lynn Open Air in Lynn MA.

I wonder why the current owners of the Lynn keep saying it was open in 1937. Also, it looks like we need to add another name to that official history.

The Daily Times of New Philadelphia OH wrote on May 26, 1939, “Boyer’s Auto Theater, the first of its kind south of Cleveland, will be opened to the public tomorrow evening … by Roland and Karl Boyer”.

On May 4, 1941, The Daily Times wrote, “Rollin Boyer of Strasburg purchased the interest of his brother, Karl Boyer of Navarre, in the Boyer Auto Theatre … and became sole owner of the business. The purchase was part of a settlement … which dismissed Karl Boyer’s suit asking for dissolution of the partnership”.

Could it be that everything in the official history is off by two years? The Daily Times wrote on Feb. 20, 1950, “The sale of the Boyer Drive-In Theatre near Strasburg to Ray McCombs of Jewett and Ward B. Franklin of Cadiz was announced today by the former owner, Rollin Boyer.”

It was still being advertised as Boyer’s Auto Theater for the whole 1950 season. On May 18, 1951, it advertised “Lynn Auto Theatre (Formerly Boyer’s) … Will Open Sat., May 19 With Many Improvements, Including in-a-car Speakers and Ramped Ground.”