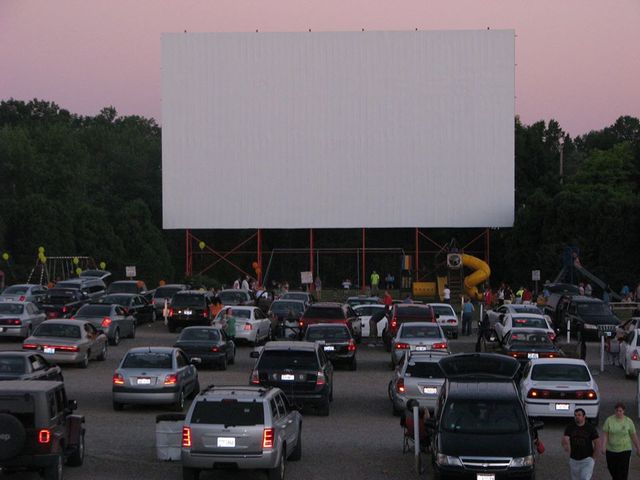 The Elm Road Triple Drive-In opened on August 3, 1950 as the single screen Elm Road Drive-In. It was operated by Stephen Hreno & his wife, the parents of Grace Hreno. Bob & Grace Hreno later took over operating the drive-in. This drive-in currently has three screens and a capacity for 900 cars.

In 2020 Grace & Bob’s daughter & son-in-law Sheri & Mark Hocevar operate the drive-in. Sheri is the granddaughter of the original operators.

The Elm Road Triple Drive-In was closed alonfg with all other movie theatres in March 2020 due to the Covid-19 pandemic. It was reopened on April 8, 2020.

I have been going to the elm drive in since i was a kid. My fiancee and i go all summer long now. Its the only drive in theater open now the warren/youngstown area. Its a shame because at one time there were several throughout the communities. Check it out if ever in the area.

An article about the theater’s sixtieth birthday: View link

The Elm Road Triple Drive-In has made the conversion to digital projection according to Shen Hocevar from the Elm drive-in.

In Sean T. Posey’s book Historic Theaters of Youngstown and the Mahoning Valley, he writes that the Elm Road was built by Stephen Hreno, who had thought to build a roller skating rink before visiting Rainbow Gardens in Pennsylvania. “The town had a skating rink and a drive-in theater,” his son Robert recalled. “We went to look at the parking lots on a Saturday night and there were a lot more cars at the drive-in than there were at the skating rink.”

The drive-in has stayed in the family ever since. Stephen passed away in 1960, then Robert and his mother ran the business. They added a second screen in 1979 and switched to radio sound in 1983. The Elm Road’s third screen went up in May 2005.

Robert and his family installed digital projection in May 2013. By that point, his daughter and son-in-law, Sheri and Mark Hocevar, were running the Elm Road.