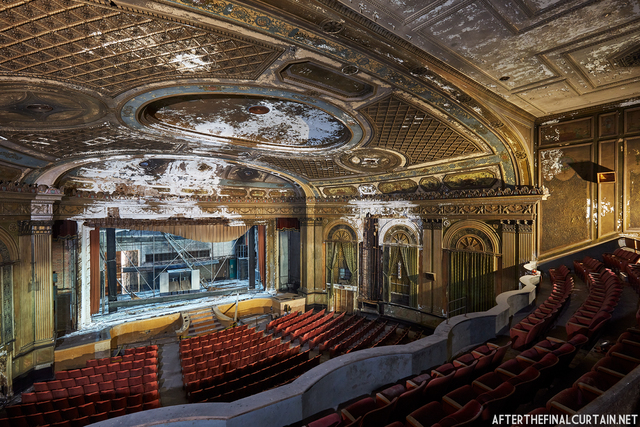 The Robins Theatre in Warren, Ohio opened its doors on January 9, 1923. Designed by C. Howard Crane and I.J. Goldston and constructed by Charles Shutrump and Sons. Co of Youngstown, construction began in 1922 at a cost of $300,000.

The exterior is in the Italian Renaissance style, while the interior is in the Adam style. The interior boasts Vermont marble columns, grand staircases, an ornate ceiling resembling the night sky, and large window-shaped grilles which once housed the pipes for the theatre’s organ. The orchestra floor seats 1,100, and the mezzanine seats 400, totalling 1,500 seats. The stage was once used for vaudeville productions, and could be converted from motion pictures to live theatre performances in 24 hours.

The Robins Theatre, along with several other area theatres, including the Ohio (former Duchess Theatre) [demolished] and the Daniel Theatre [converted into gymnasium] were controlled by The Robins Theatre Enterprises Co. Daniel J. Robins was founder and president, in partnership with his brothers Ben and David Robins. Daniel Robins was an earlier partner of Abe Warner of Warner Brothers. David Robins was later to marry Ann Warner. Many famous personalities have appeared at the theatre over the years. The Brown Derby Cellar Bar and Restaurant was a once a local showplace for famous Big Bands.

The theatre remained in continuous operation fron 1923 to 1974, when its doors were permanently closed. The theatre remains almost completely original; however, thirty years of vacancy and disrepair have taken their toll, as is evident from peeling paint and crumbling plaster. Plans to completely renovate the theatre have been under discussion for several years. Preliminary plans are currently being made, however the renovation process is pending upon further funding.

In December 2017 the building was sold to Downtown Development Group LLC with plans to renovate and present concerts, comedy and film performances.

Contributed by Nathaniel A. Riggle
Get Movie Tickets & Showtimes

The picture from kencmcintyre from 3/19/10 is likely from 1952 or 1953, judging from release dates of movies shown on the marquee.

Students from New York’s New School of Design were in to see about restoring this theater according to WKBN-TV News.

I’m sorry to report that the Robins Theatre WILL NOT have a Theatre Pipe Organ installed. I offered to donate an original pipe organ to the theatre and the Development group informed me that they were not interested. If anyone knows of a theatre that wants a pipe organ, I have at least one to donate. You can contact me at 330-792-1321. Thom.

It didn’t have an organ when it originally opened, and doesn’t have any organ chambers. They probably didn’t want to spend the extra money to work that out.

Status should be opened. The theater reopened on January 9, 2020.

Website: http://robinstheatre.com/ It appears from the website that only live performances will be occurring at the theatre.