Memories of the Robins Theater 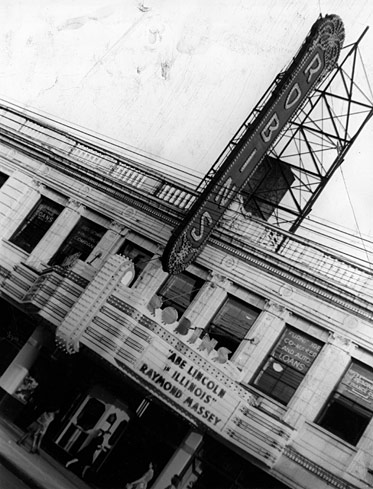 Dan’s obituaries detail his life and the chain of theaters he operated. After pioneering the first theaters in Youngstown, Ohio, Dan purchased the Warner Theater in Youngstown from Sam Warner, the father of the Warner Brothers.

I have a lot of memorabilia involving Dan and his brothers, Harry and Ben, who partnered in the theater business with him. My grandfather, I.J. Goldston, was the architect for the Robins Theater (and the Trianon Ballroom on Euclid Ave. in Cleveland). My mother at age 3 ½ presented the mayor of Warren with a big gold key to the theater at its grand opening. All 1500 seats were filled.

There were two operating companies: The Robins Theater Company and the Robins Amusement Company. The first ran the movies; the second ran the popcorn and candy stands. The theaters never made any money; the real profits came from the popcorn, candy, and pop. Dan’s nephew, Eli Goldston, used to argue that the customers should be admitted to the movies free, just so that they could buy the popcorn!

There is a project to renovate the Robins. The State and the City have supported the effort, and a formal architectural budge estimate is still underway.

Greetings Sir! I am a long time citizen of Warren Ohio and have my roots in the community on the east side of Warren having attended the famous Warren G. Harding HS in the late 70’s. I am now desirous of utilizing a theatre for a concept that has been with me for the last few yrs. I reside in Boardman and a couple of week ago I view the article written by the Tribune. I would like to see if the possibility of what I would like to do would meet the quest of you and your family.
Please feel free to email me @ my name is Rev. Jerome A. Jones.

Your memorbilia of the Warners as well as the Robins sounds as though it would be valuable to historians, so may I suggest you consider setting up a bequest so that the materials are sent to the organization of your choosing when you leave this scene. If a university library or archive (the most reliable in the long term) is not interested, may I suggest contacting the Theatre Historical Soc. of America: www.HistoricTheatres.org or the library of Academy of Motion Picture Arts and Sciences in Pasadena: www.Oscar.org ?

Good advice from Mr. Rankin and I hope to see this theatre, in person this summer! The above historical piece by Robin Lake is most fascinating to read. Thank you.

Thank you for the suggestion about bequeathing the materials. I will check with my cousins and, if they concur, will assemble the materials and deposit the materials (or copies) with The Western Reserve Historical Society in Cleveland.

Rob: Mr. Rankin is a good man and knows alot about theatre though I have never had the opportunity to meet him, in person. To follow through with his suggestion(s) is a good thing, too.

Rob: And while researching the Robins Theatre I have been researching many of the theatres that were in Youngstown such as the Palace which is now a parking lot! If the City of Youngstown had to list 5 very bad demolition decisions, THIS would be one of them and perhaps in the #1 pole position! I use that term, pole position, as this is May and that means INDY and those famous words, “Gentlemen, Start Your Engines”.

Just a correction: My grandmother’s brother, Ben Robins, married Anna Warner. I have film of Anna Warner in my grandparent’s yard (2915 Cresent Drive, Warren) in 1939, about a year after Ben’s death. Ben is buried in Children of Israel Cemetery in Youngstown.