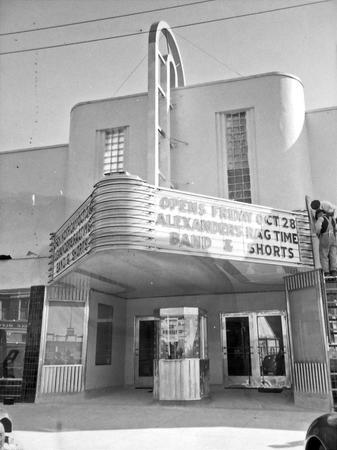 The Murray Theatre was one of two movie theaters in downtown Murray, a town located in the middle of the Salt Lake valley. It was opened October 28, 1938.

The Murray Theatre showed second-run movies for a long period, but ultimately could not compete with the explosion of multiplexes in recent years. Before closing, the theatre tried for a time to do live entertainment.

The theatre was most recently used as a church, but was vacant in 2018.

I hear MICHAEL has changed his name to MURRAY.

I went by the Murray a few days ago and the theater is up for sale. It appears to be still operating as a church at the moment. It’s too bad this theater doesn’t still have a parking lot.

The Murray is now being used for live music acts. There is also a comedy hypnotist on Saturday night. Its great to see the Murray in use again! (The sign has not been lit since I was about 16, now it is again!

When the Murray Theatre was occupied by the Unity Church, I was purely involved as a volunteer producer of their productions and mainly for the “theatrics” of the Service.

The building was preserved as to the ability of limited funding as well as generous donations of equipment and supplies needed. Everywhere was completely cleaned and painted. A new HVAC system was also installed.

Both of the side shops were incorporated into use by the theater; one as a complete coffee shop and the other as a book store. The third building was ideal as classrooms complete with restrooms.

The red velvet curtains were in excellent shape but the electric motor needed replacing. But pulling by hand worked just fine! Gone were the footlights due to the stage apron cascading down in tiers of wide steps, thus removing several rows of seats.

I installed all new shelving for the marquee letters plus adding spots and floods to the newly updated stage lighting system. Normal projection had been removed ages ago but the screen was in very good shape along with the huge audio cables which traversed above the false ceiling. The blue and gold Neon surrounding the air ducts worked just fine.

In ending, my question question is “Why hasn’t the owner of the Murray used this venue for concerts, film festivals and stand-up comedy? Users could bring in their own equipment and the rent would keep the lights "ON”. As for almost no parking, I understand there is a huge lot within a block or two.

Let’s get it on boys and girls… and have some fun doing it!

Sorry, I forgot to mention that everything was brought up to safety code and that that included the fire department; they had an extra fire exit installed leading from the auditorium onto a lovely sunny patio -just right for an over-flow reception. Mmmm good!

Thank you, “Lost Memory” for the Oct ‘06 photo of the facade… but what happened to the marquee? Was it wanton damage or just neglect by the stupid owner who won’t lease the place for a fair price???

I have memories of being “dropped off” with my cousins when we were young to catch a double feature, I remember one movie was “The Watcher in the Woods” and I think it cost only a dollar. This was probably in the late 1970’s. It was the time that megaplexes were starting to pop up everywhere, and the Murray was starting to show wear and tear, even though the auditorium was very full. I believe I remember a similar theater elsewhere in Salt Lake, called the Logan?? I think same size, layout etc.

Google Street View of July 2018 shows no indication of any use for this theatre. Both storefronts are vacant and the marquee has a sign urging use of the public pools.