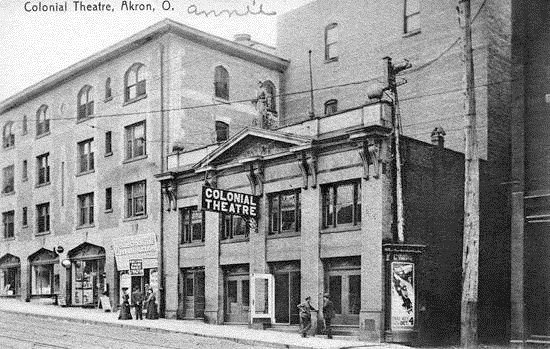 The Colonial Theatre was built in 1901-02 as a 1,600 seat playhouse, opening on 2nd March 1902 with the play “Floradora”. It was supposedly a copy of the old Lincoln Playouse, New York. At one time it was leased to the Ohio Circuit Company, headed by the playwrite and actor George M. Cohen. After 1910 the theatre featured vaudeville.

Around 1928 the Colonial Theatre was converted into a motion picture theatre and a small Wurlitzer theatre organ was installed. During World War II, vaudeville and stage shows returned to the Colonial Theatre before it went back to full time movies. It was demolished in 1970.

I was an assistant manager at the Colonial in the mid-50’s! It was operated at the time by the Shea Corporation and the manager was “Dusty Rhodes”. The theatre premiered “The Robe”, 20th Century Fox’s first CinemaScope film. In the 1940’s I attended a performance of “The Student Prince” on stage, perhaps one of the last stage performances prior to installation of the huge C-Scope screen that blocked the entire stage area. Part of the building housed “The Backstage Bar” owned by piano-playing Ted Boyer. The theatre was known for it’s “Peanut Gallery”, a 3rd floor balcony with extremely steep tiers of seats. Originally, I believe the building was an opera house? It, with the B.F. Keith PALACE, Akron LOEWS, and the Strand (Warner’s) comprised the downtown’s main theatres. It was a glorious time of my life! The building’s location is now a concrete parking structure. Only the Loew’s Theatre survived, renamed the Civic. It still has it’s original Wurlitzer Theatre Organ and a serves as a grand peforming arts center. (TheMarqueeMan)

My grandpa, Charlie Hermann, worked back stage at the Colonial. My mom would often drop us off at the backstage door where grandpa would let us in. While mom was shopping, grandpa would “babysit” us. We would occasionally see him peek out the curtains from backstage to keep an eye on us. Saw “Davey Crocket” at the Colonial. I also remember what we called “peanut heaven” – sat there when I was a little older and on a date! Grandpa also used to bring home the left over popcorn and put it in a big barrel in his garage to feed the birds. We delighted in going in there and grabbing as much popcorn as we wanted (so what if it was stale by then?!!).

On his TV show George Burns mentioned playing this theater — but I can’t remember if he said they loved him or hated him!

I worked at the Colonial Theater from 1964 through 1966 as a theater usher. This was during my sophomore and junior years in high school. It was a great place to work. “Marqueeman” previously wrote that the theater was owned by the Shea Corporation and was managed by Dusty Rhodes in the the mid-50’s. This was still the case during the time that I was there from ‘64-'66. The theater was still beautiful and kept in good condition. Back in those days, most theaters had one balcony. We had the luxury of having two very beautiful balconies for our customers. The Colonial originally was built for live stage shows. The original dressing rooms for the actors were still there when I worked there. There were light bulbs around the mirrors in their dressing rooms. The stars of the old stage shows had a star on their dressing rooms. These dressing rooms, as well as catwalks, and other stage equipment surrounded a huge stage that was immediately behind the large screen at the Colonial Theater.

The Peanut gallery was extremely steep. I’d slide down the steps to my seat afraid I would trip and go over the edge if I walked down the steps.

I think I saw Old Yeller there in that balcony. I remember seeing the Disney shorts, Vanishing Prairie or something similar there too. The last movie I saw there
was The Young Lions with Montgomery Clift, Marlon Brando, and Dean Martin.